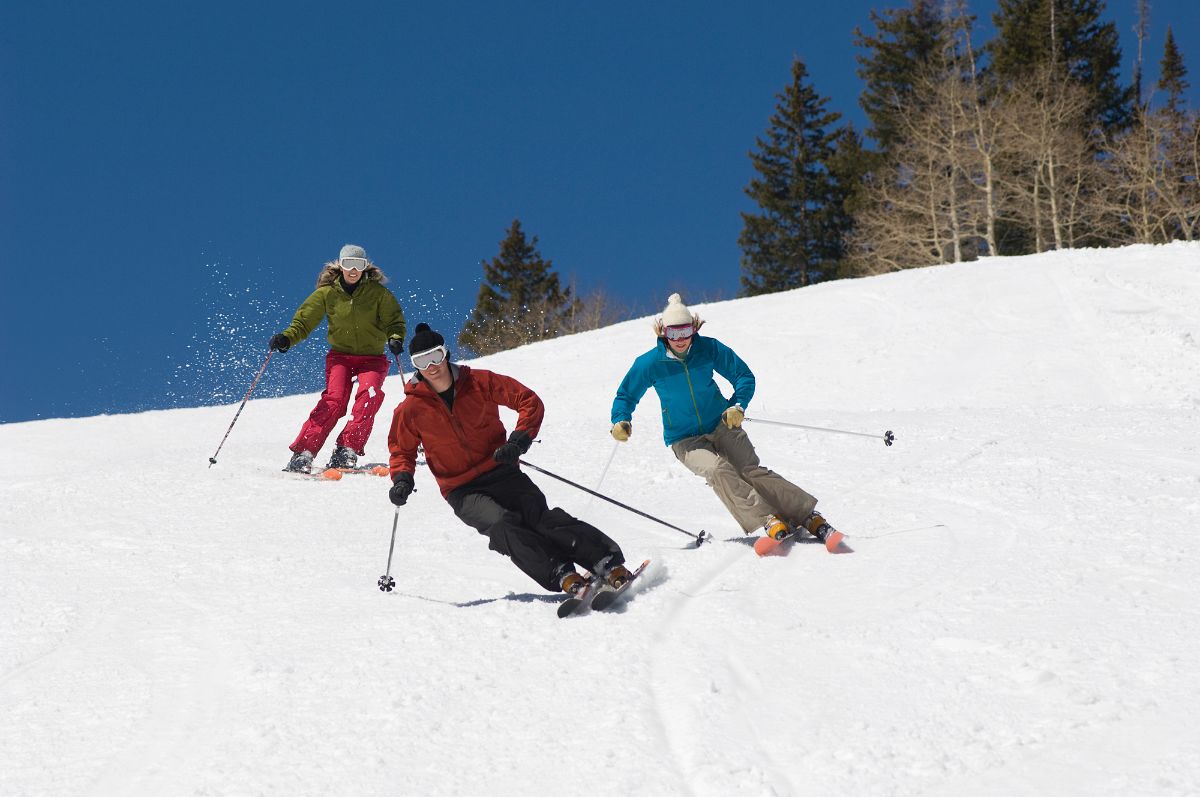 Learning how to turn is among the most essential skills for both a beginner and an expert skier.

The art of turning on skis has two fundamental purposes.  The obvious reason is that it changes the direction in which the skier was headed. It is also the most important way to safely make it down a ski slope of any size -turning controls the skier’s speed.

Those new to this incredibly enjoyable winter sport first learn to snowplow and then the gliding wedge. This is a V-shaped posture that is most often seen on the bunny hill by those just learning to safely make their way down the mountain.

These types of ski-turns offer greater control on gentler slopes and flatter surfaces. The snowplow and gliding wedge ski turns are also the easiest ski-turns to master.

Contents show
What Is Skidding in Skiing?
What is a Carved Skiing Turn?
How to Do a Carved Ski Turn?
Do You Need Skill To Carve a Ski Run?
What is the Difference Between Carving and Skidding?
Just Have Fun!

What Is Skidding in Skiing? 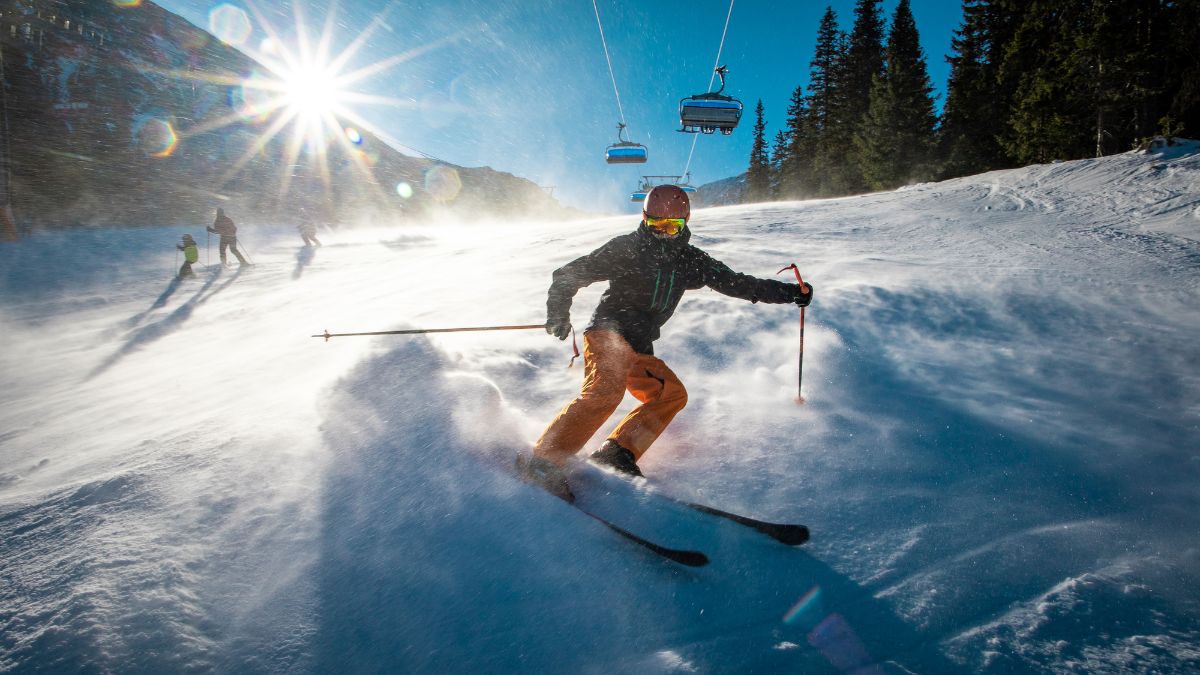 Skidding is a type of turn in which your skis remain flat on the snow as you transition through a turn. While maintaining each ski parallel to one another, the skier simply has to apply more pressure to (or push on) the ‘uphill edges’ of the skis.

Using flat, parallel skis in a skidded ski turn makes it relatively easy to negotiate a wide turn while braking (or controlling your speed) through the entire turn. As you find your path down the mountain, it is important to keep your hips aligned over your feet.

Skidding in this manner can be done without gaining speed, which then makes it easy to make your way down the hill rhythmically.

On steeper slopes, skiers must use more advanced turns, which allows more efficiency – at faster speeds, across more treacherous terrain like moguls or sharp drops.

What is a Carved Skiing Turn? 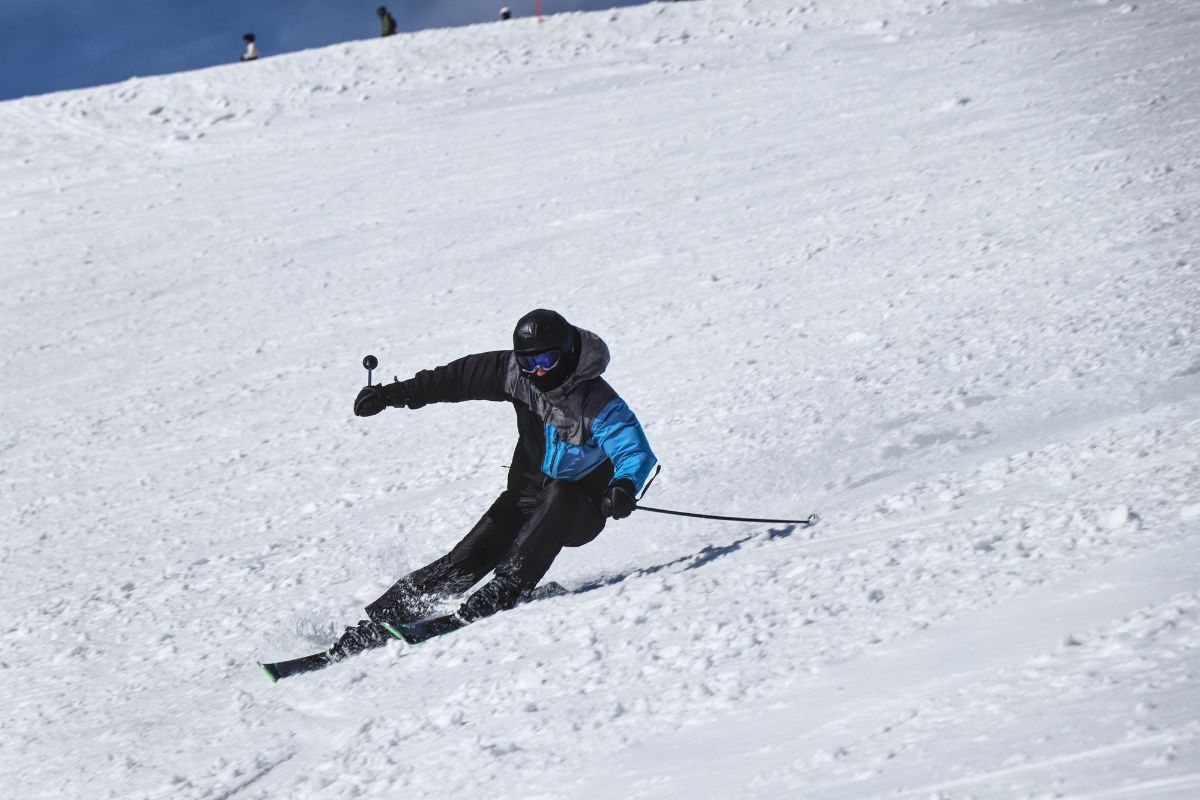 The carving turn is among the most versatile and efficient ski techniques. An expert carving S-shaped run – from edge to edge, is a thing of grace and beauty. The best carvers find they hit a bit of a Zen-zone (like a runner’s high), in which the skis seem to know what to do.

The explanation of how a carved ski turns is another one of those complex physics equations. In simple terms, the pressure that is applied to the ski’s edge creates an arc to which the skis follow. This arc – which like any arc, is a small portion of a circle, simply steers the skier in an alternate direction.

How to Do a Carved Ski Turn?

A proper carve requires the skier to place great pressure on the outside ski’s front to initiate as well as to hold the turn. Carving is when the skier rolls an edge into the snow so that the ski can no longer slide in its current direction – this creates the turn.

Fortunately, modern skis are manufactured with a bit of an arc to help create the arc required. Carving offers the most efficient turn, which is characterized by the least amount of snow being thrown or moved (this also requires less energy to negotiate the ski run or slope). 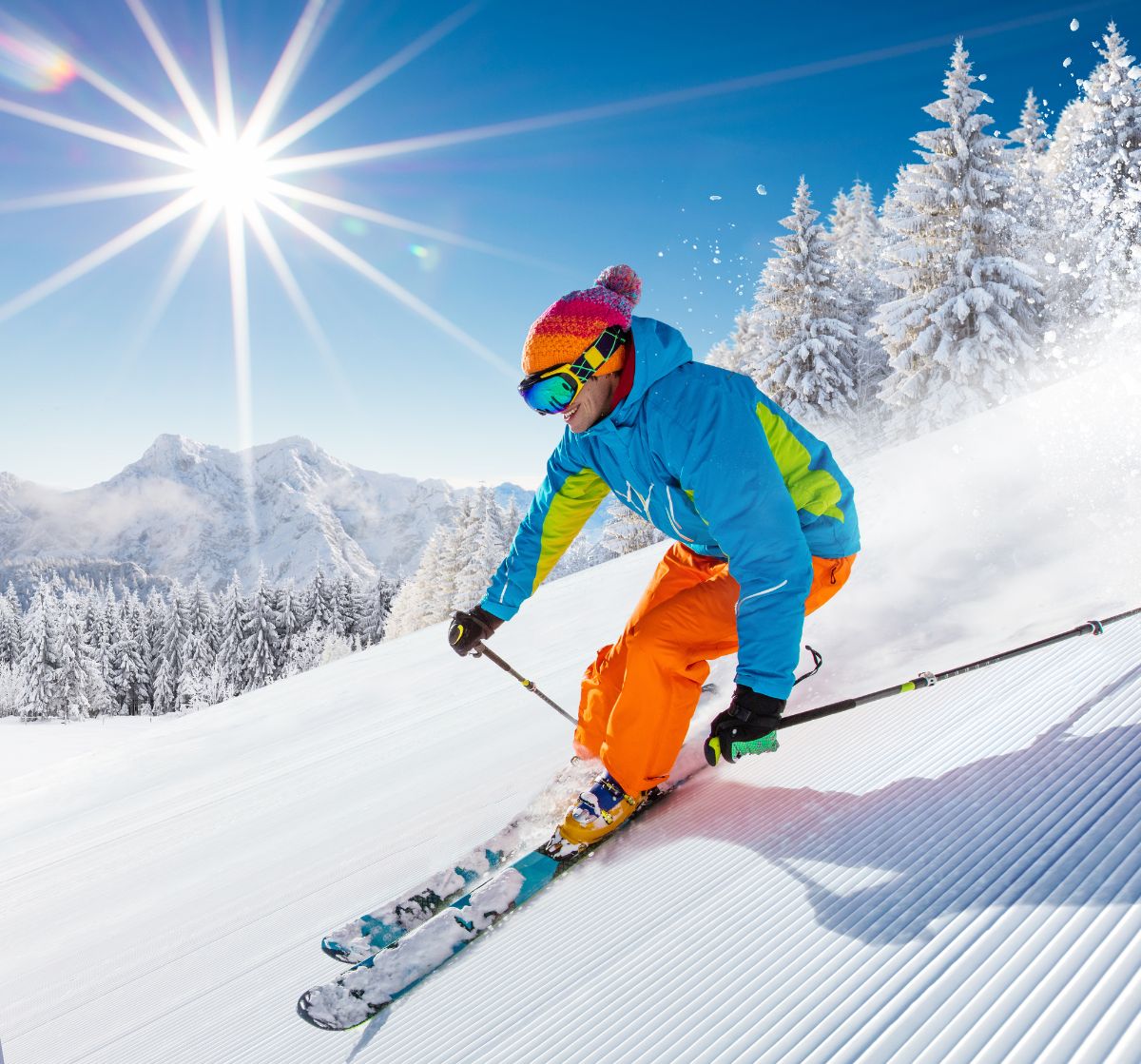 From a physics perspective, a carved turn also creates the largest reaction force – “The force that the snow pushes back with when a ski puts a force into the snow.” This type of ski turn allows for great control at great speeds and steep vertical drops, which is why it is the preferred racing technique.

Carving maintains the skis’ efficiency because it forces the skier to follow the direction of travel rather than skidding across the current direction of travel. But the faster speeds when carving create strong force or pressure, which further tests the skier’s athleticism.

“Olympic skiers subject their bodies to as much as 3.5 g’s —
more than space shuttle astronauts endure during launch—and
to velocities that would earn them speeding tickets in most states.”

A skier will experience increased pressure as they pass through the turn. However, the skier must know where, how much and when to apply this pressure if they are to ski efficiently at breakneck speeds.

Ski carving requires precise moves and great focus, but having a chance to carve freshly groomed snow, is one of the highlights of being able to master the carved ski turn.

Carving ski turns requires that you change ski edges (which is more of an alternating pattern)– before your skis change direction. It is the very reason your skis (and you) will head in another direction. It begins by rolling your ankles and knees.

The lower half of your body – from your thighs to your ankles, must actively keep your skis’ edges engaged – and hold this engagement throughout the entire turn.

“Being centered over your skis in a balanced position is one of the cornerstones of this alpine skiing technique.”

You’ll know you’re carving when you leave a wake of clean arcs/lines. Consider these helpful suggestions : 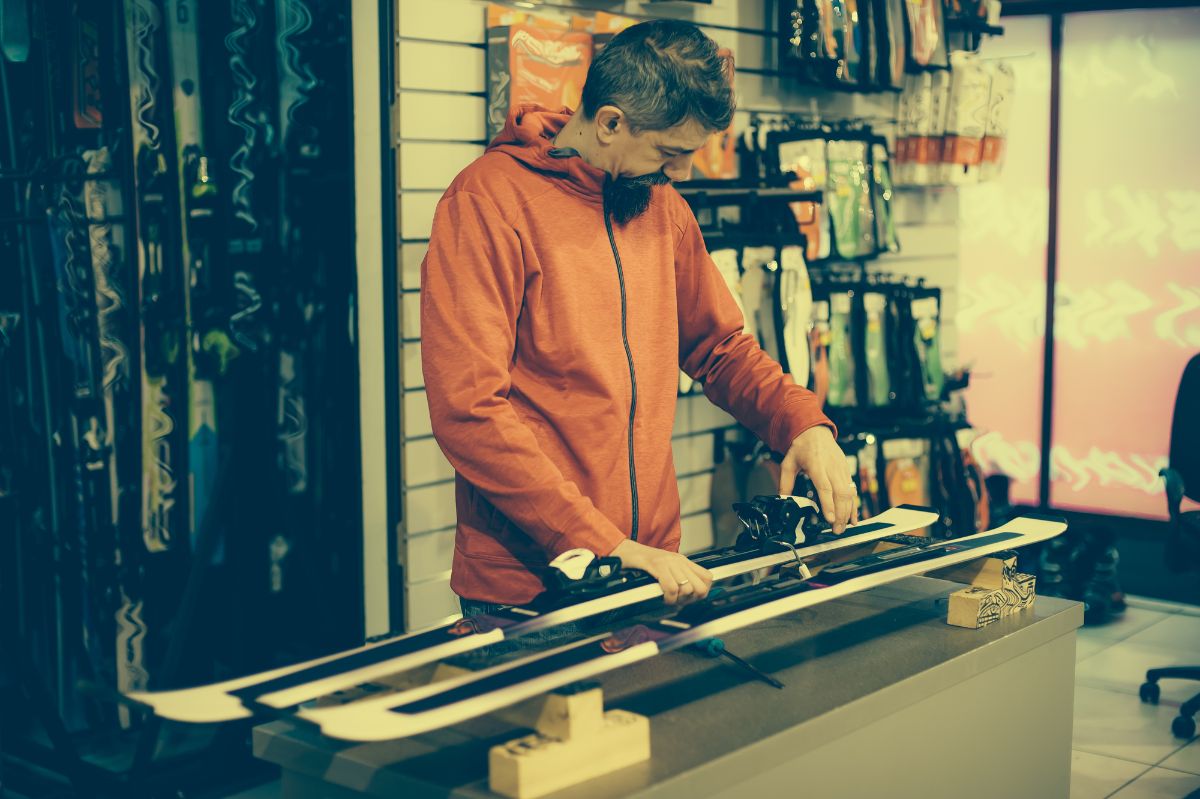 Do You Need Skill To Carve a Ski Run?

As a general rule, the steeper the ski run, the more skill will be required to maintain control and speed throughout. Those who carve steep vertical drops are expert skiers and world-class performing athletes – with refined skiing abilities.

What is the Difference Between Carving and Skidding? 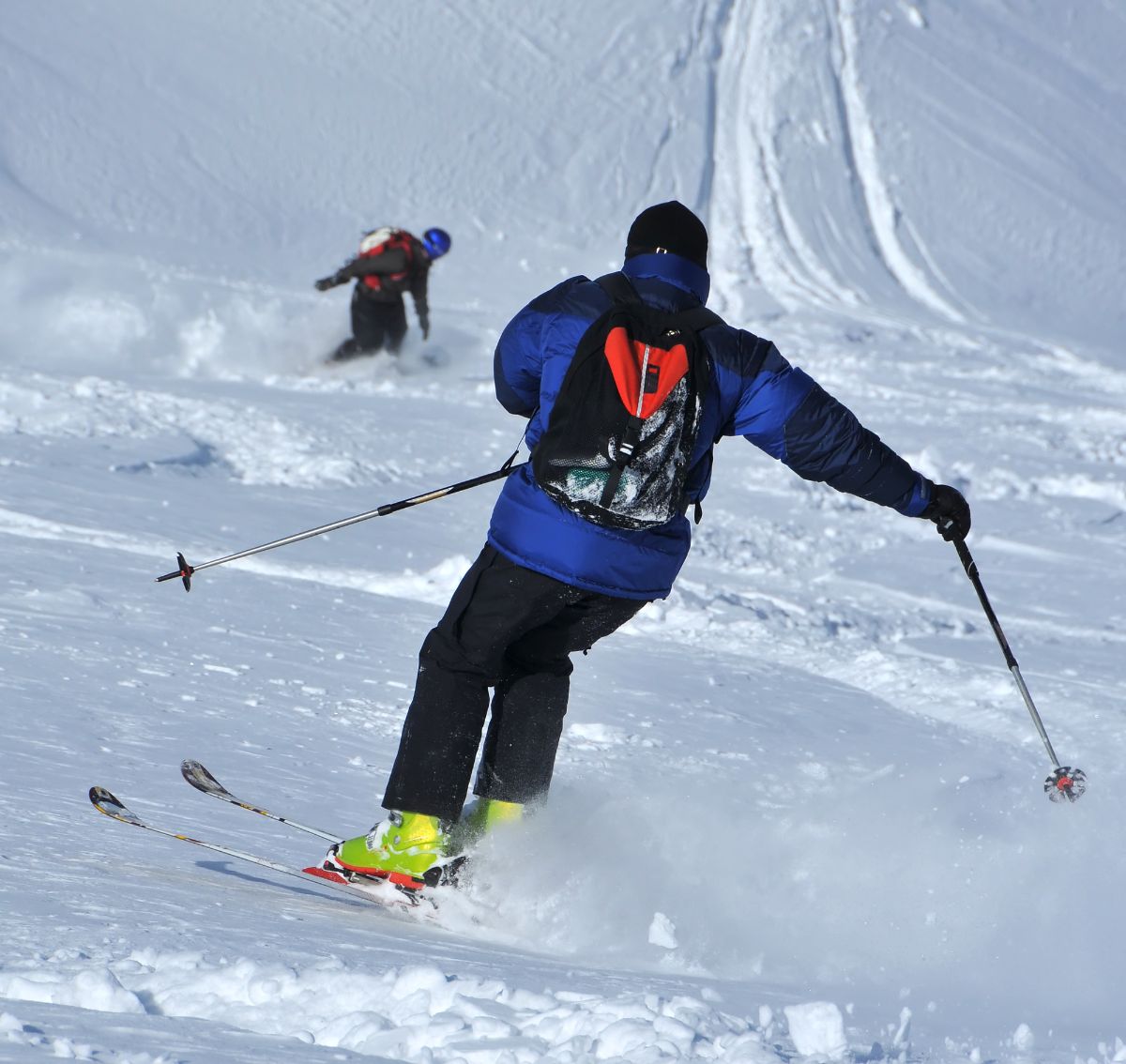 As noted above, a carved turn simply refers to a turn on which your ski edges remain engaged through the entire turn. In addition, the tip and the tail of your skis cut through the same line – ultimately creating a clean arc in the snow – the hallmark of a perfect carve.

If your skis are not tipped (edges engaged) before your skis start heading in another direction, you are not carving but skidding. When executing a true ski carving turn – the skis push the skier through the turn. Conversely, when skidding through a turn on a slope, you must proactively push your skis through the turn to complete it.

Carved turns differ from other types of turns (i.e., the slide, skid, or hop turn) in skiing. A carved ski turn is more efficient than these other skiing techniques – which are helpful when used in specialized skiing conditions.

Pure Carving is a wonderful skill or technique to accomplish as a skier. It takes practice but is generally well worth your effort. Skidding can be used by skiers of all skills when the situation warrants it.

Don’t expect results overnight, but through gradual effort and a bit of practice, you can swish your way down the slope as you make your way down to an apres-ski snack or drink in front of a hot fireplace.