Ski bindings are the unsung heroes of skiing. What would we skiers do without something to make sure that our skis stay on securely but don’t get tangled up in our legs when we crash? Downhill ski bindings have two essential functions.

For one, they have a clever design that keeps you tightly attached to the ski until you don’t want to be—i.e. when you’ve fallen over—preventing injury.

They also act as the point of contact between your boots and your skis, transferring every slight adjustment you make in your body’s positioning to the skis and helping you to control your descent.

Below we’ll be covering the main kinds of downhill ski binding—traditional alpine, alpine touring, and tech—how their designs work, and how to set them up properly.

Traditional Alpine ski bindings are what the average downhill skier is most familiar with. These bindings work for downhill skiing only, so they don’t allow you to lift your heels while attached to the ski.

They have metal clips at the toe and heel of the binding that keep the boot in place and allow a small range of motion, usually about five millimeters, before releasing the boot. They’re the safest option with tons of features to prevent injury, and most people learn on them. 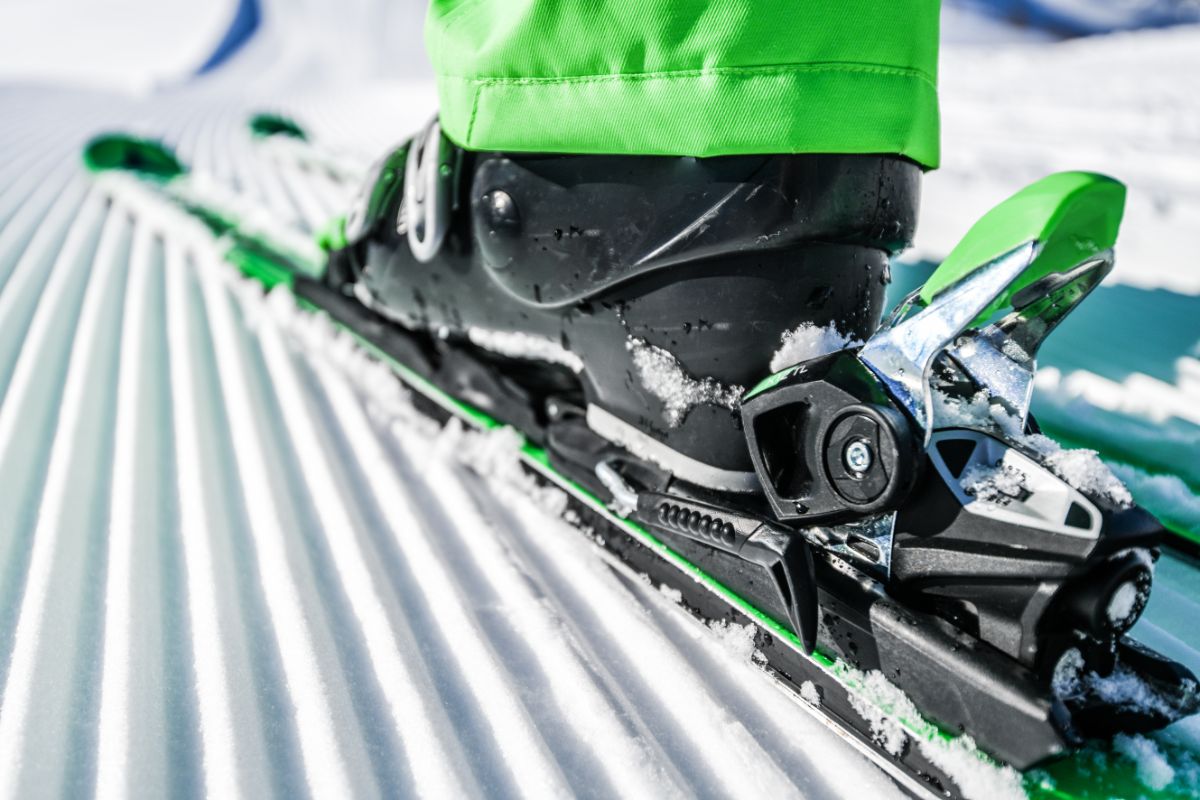 Traditional Alpine bindings will unclip if the boot moves either too far to one side or too far towards the front of the ski. The pressure threshold for the binding to disengage is called the DIN, short for Deutches Institut für Normung (German Institute for Standardization in English).

DIN is measured in Newton-meters, which is a measure of torque. This article isn’t supposed to be a physics lesson, so suffice it to say that torque, for our purposes, means how hard your boot is twisting off your ski. The ideal DIN setting is different for every skier.

It’s based on your height, weight, and even experience level. Hardcore skiers sometimes like a higher DIN so they can really lean into turns and put a lot of weight on the skis.

If you go to a ski shop to get outfitted with your own pair of boots and skis, they’ll take your measurements and adjust the DIN accordingly. If your ski tech is a consummate professional, they’ll even attach the ski to the boot, apply pressure, and cross-reference the amount of pressure it takes to release the ski with the DIN.

In general, ski boots that are compatible with one set of traditional Alpine skis will be compatible with all others, since manufacturers try to standardize the binding system for a particular ski design. Of course, Alpine touring skis need their own kind of boot and binding, because they lift off the ski.

These bindings are for the athletic, intrepid backcountry skier. Alpine touring skiing is also sometimes called by the French word randoneé, meaning excursion, and that’s exactly what Alpine touring skis allow you to make.

To put it plainly, they let you easily switch your skis between cross country and downhill mode so you can traverse almost any grade of terrain and get the best of both skiing worlds.

Alpine touring skiers go off into the snowy backcountry, where the snow is fresh, untouched and never artificial, climb hills on their skis, then switch to downhill mode and hope that they find a path through the trees. 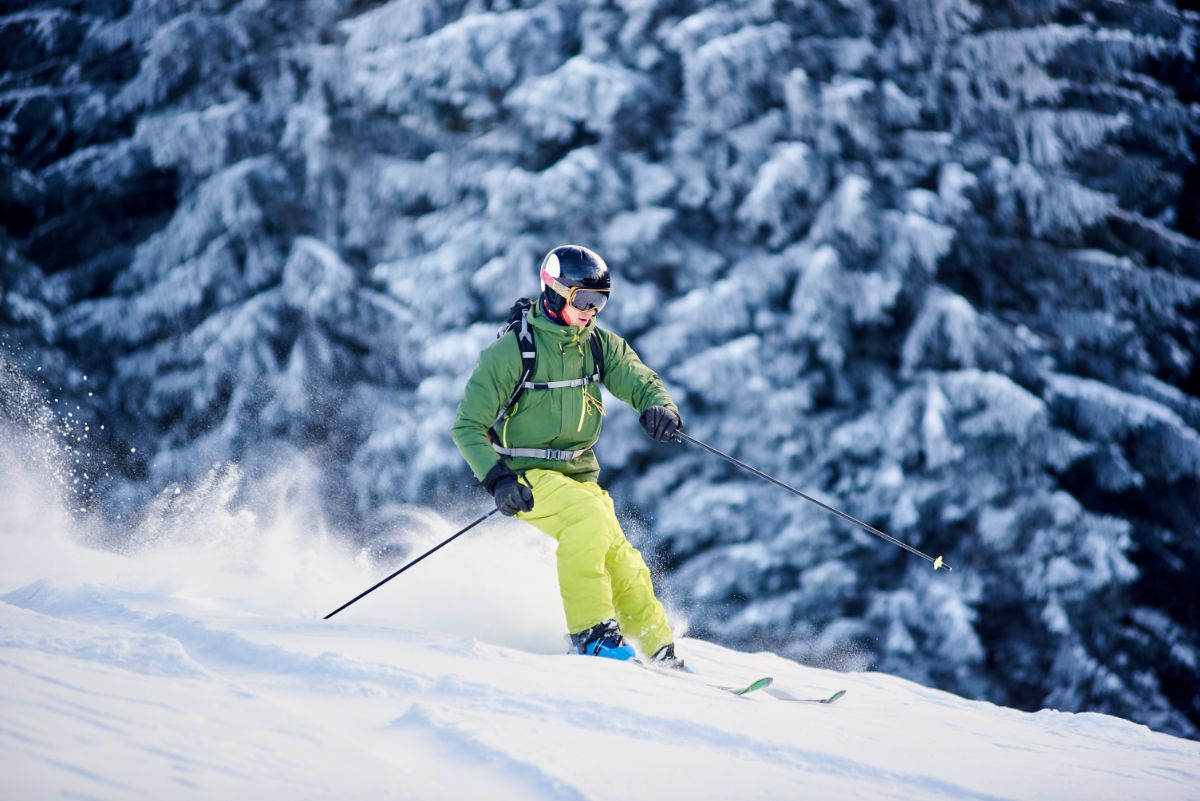 Traditional Alpine and Alpine touring ski bindings largely share their basic design concept when it comes to DIN and downhill skiing—when you fall out, so do the skis.

Again, let someone at a ski shop figure out your DIN, unless you’re the guy who does that for a living, in which case, you probably already know all the information in this article.

Since Alpine touring skiers use their skis for uphill climbing, manufacturers build both the skis and the bindings to be lighter than a downhill binding or ski, which means that they’re not quite as durable and reliable, though they’re also not as much of a burden to haul uphill on your feet.

Alpine skiers are the risk-taking kind, though, so this fact doesn’t worry them a bit. Some Alpine touring bindings work with regular downhill ski boots, God bless them, but some need special boots.

While getting another pair of boots for Alpine touring bindings might be an inconvenience, it might save you some hassle, calories, and sore legs because it’ll be lighter and easier to trudge uphill with.

There’s a much higher chance of compatibility between Alpine and Alpine touring skis than between tech bindings and any other system.

See also  Shell vs Insulated Jacket for Skiing? When to Wear Which One? What's better?

This category of ski boots technically isn’t a different category from Alpine touring skis, but we’ll let that slide because everyone seems to refer to them that way.

This isn’t misguided, because, though they serve the same purpose by giving you both skiing modes, they don’t have the DIN release system that Alpine and Alpine touring skis have. Tech bindings are the more old-school method for traversing the backcountry.

With their ultra-light weight, simple design, and legacy of use by intrepid backcountry explorers, they’re truer to the randonneé spirit of Alpine touring. 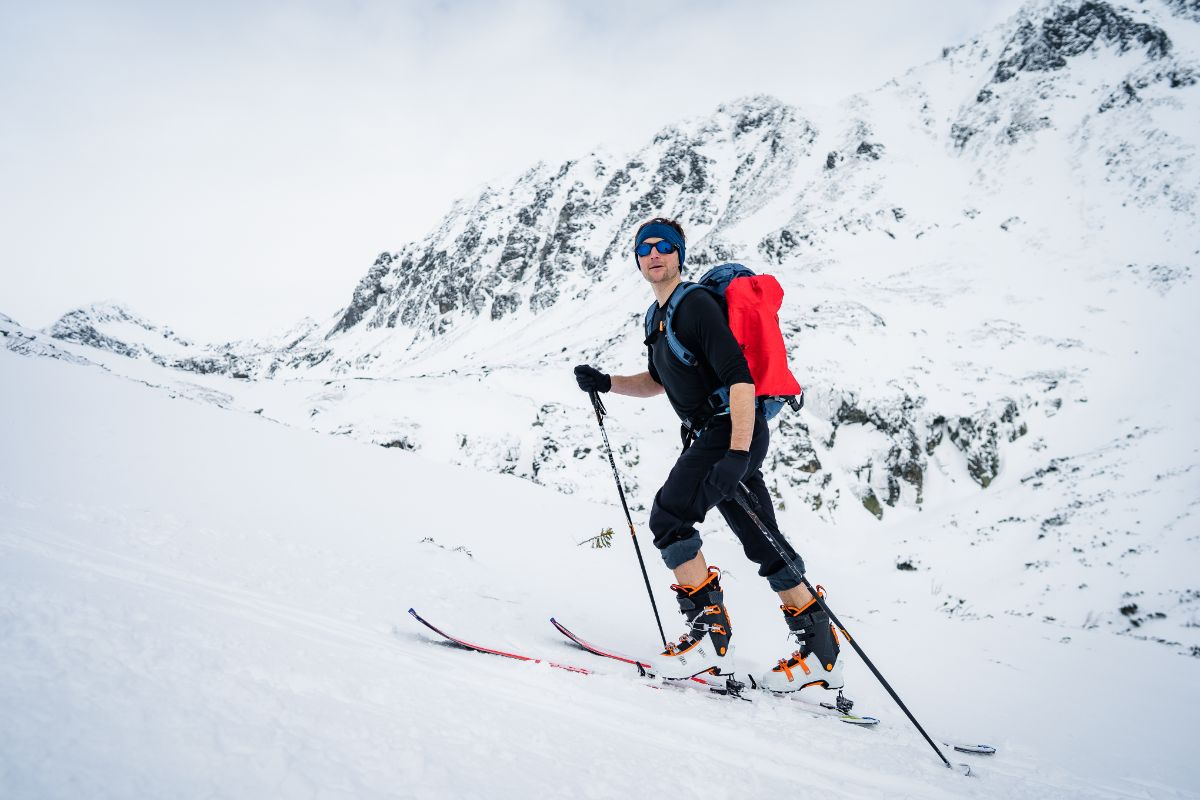 Tech bindings, unlike the more recently designed Alpine touring binding system which can switch from DIN to walking mode, have to be physically changed by the skier from one mode to the other by clipping a set of metal pins in and out.

Tech bindings are incompatible with boots designed for Alpine touring and Alpine skis, and you’ll need to get a different set of boots for them.

On their face, these look like severe disadvantages, but tech bindings win out decisively in the weight department. These bindings are what you want if you’re planning on doing just as much climbing as downhill skiing over a long distance, and you’re a very competent skier.

The big tradeoff in backcountry skiing is between the all-around safety and downhill capabilities of Apline touring bindings, and the versatility and portability of tech bindings.

If you’re looking for something that will let you stray away from the crowded main drag of the resort and expand your skiing possibilities while letting you get home in time for dinner and hot cocoa at the ski lodge, regular DIN-capable Alpine touring bindings make sense.

See also  Is it Easier to Ski with Short Skis?

But if you’re planning on channeling your inner Norwegian and traversing the snowy hills all day, you’ll want tech bindings, as long as you’re not planning on doing the downhill equivalent of a double black diamond on them. 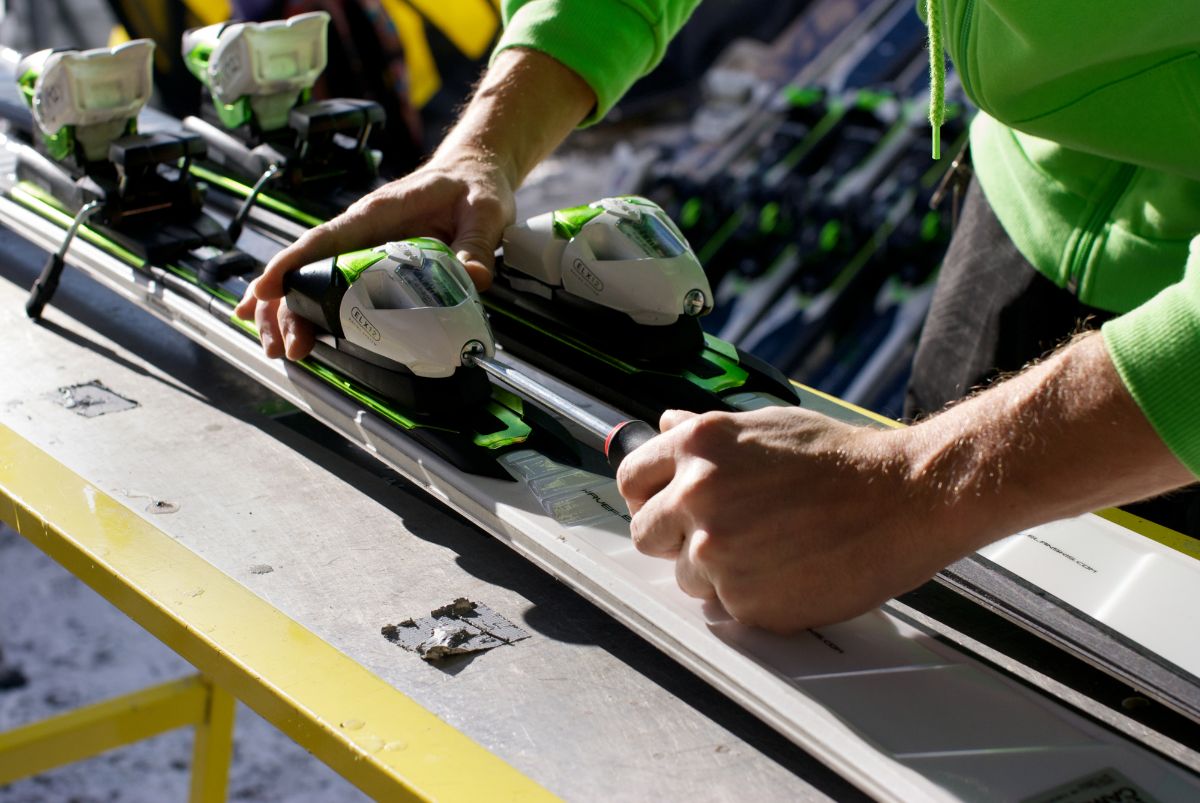 Alpine and Alpine touring skis typically feature brakes. These brakes are for the skis, not the skier—when a ski clips off of the boot in a crash, it can get lost, but these brakes are small metal attachments that stick into the snow and mitigate the tendency of the skis to go on their own adventures, never to return.

DIN-based skis also feature an anti-friction device, a fancy name for a Teflon pad below the toe of the ski boot. The AFD makes sure that any force acting to separate the binding and the boot goes to the DIN system and not the base of the ski.

If this weren’t on the ski, there’s a chance that the ski wouldn’t properly disengage in a crash. The ideal ski binding is made of the strongest, most force conducting, durable yet flexible material possible.

Bindings are the link between your feet and the ski, so they have to deal with the torque that you create when you lean into a turn. The faster and deeper you can turn, the more force you exert on the bindings, and the better quality (read: expensive) the material you’ll want.

Tech bindings don’t feature a DIN-based system, so none of this applies to them. They have a decidedly minimalist design, which can be a blessing in disguise—no need to get your measurements taken for a DIN rating, and there’s less that can break.

The History of Ski Bindings 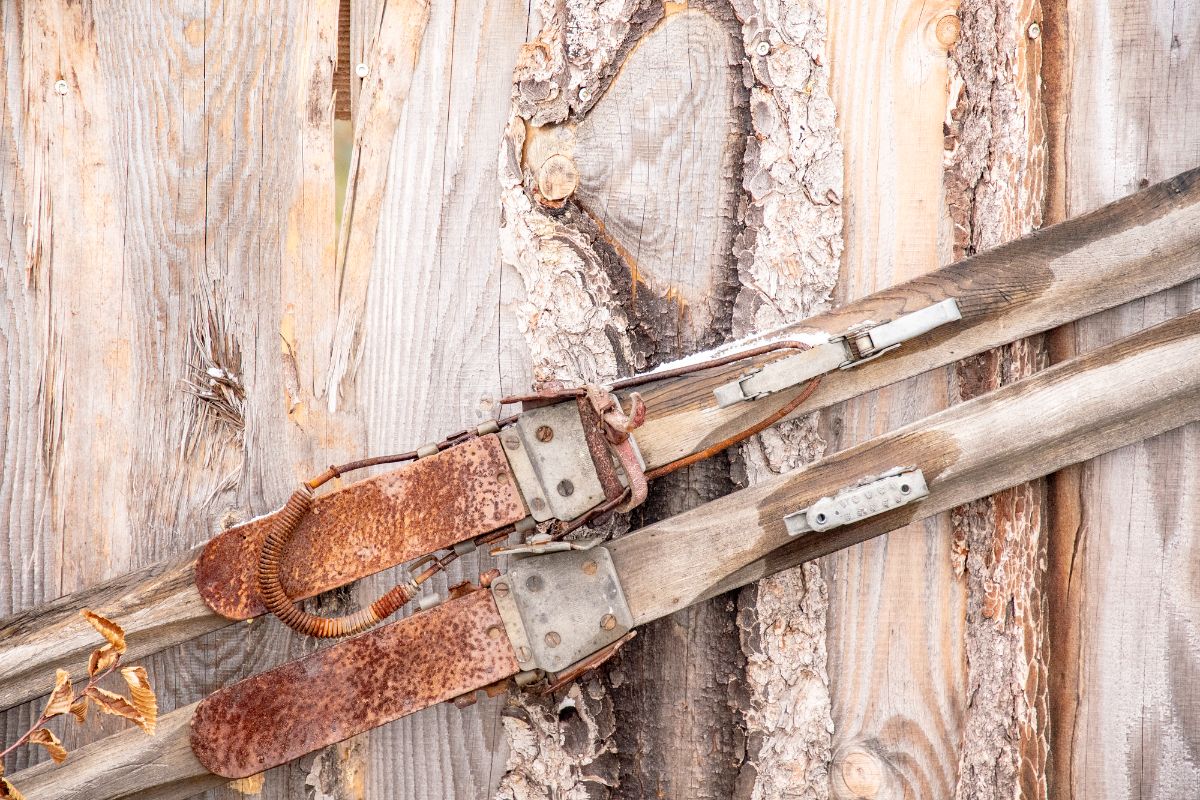 Ski bindings have come a long way since the early days of skiing. Back in ancient times, skis were just two long pieces of wood strapped to your feet by a piece of leather or a knot tied with plant fibers.

Imagine barreling down a mountain with nothing but a piece of bark keeping you from wiping out! Ski bindings had their first big reinvention in the 1840s, when Norwegian skiing pioneer Sondre Norheim created a ski binding with another connection between the boot and the ski.

This enabled a new skiing technique known as telemark that skiers still use today. After about 150 years of experimentation with new designs, new mechanisms like safety releases, and new materials like plastic, the modern ski binding emerged in the late 20th century.

Before the advent of skis that could reliably detach from the boot in a crash and stay securely during use, high-speed downhill skiing wasn’t really a safe option, and cross-country skiing was the only kind of skiing.

Injury rates decreased as new designs emerged, largely thanks to the modern self-releasing ski binding, which detaches the ski from the boot when a certain amount of pressure is on the ski. The first ski to have this feature was the 1937 Saf-Ski, and this design, over time, gave way to modern ski designs.