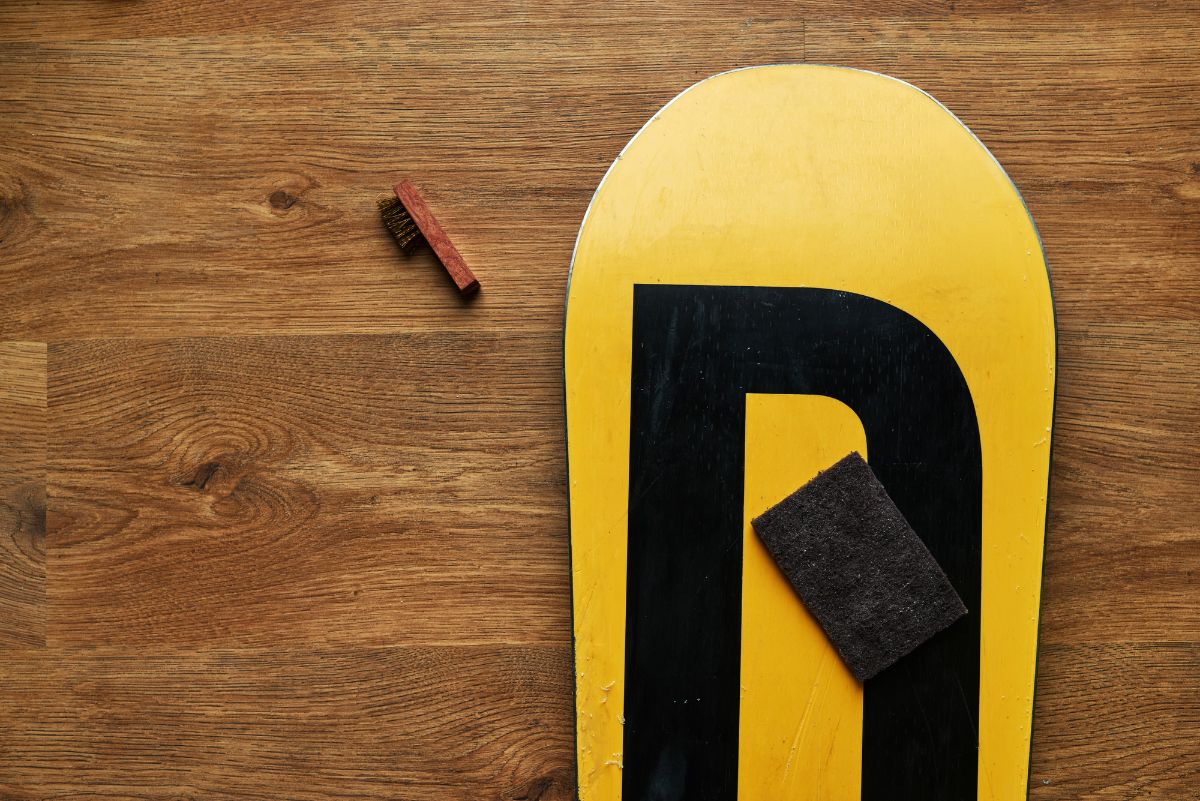 Think of snowboard wax as a moisturizer for your snowboard base. When you melt it onto the base, it soaks in to protect the P-Tex and prevents the base from drying out.

Waxing makes your snowboard perform so much better by giving you a smooth, fast ride as you glide across the snow.

It’s important to choose the right snowboard wax from the various options available for the snow conditions on the day you’re using your snowboard. For example, the wax mixture you use depends on the temperature of the snow and the humidity.

Different wax mixtures help the snowboard accelerate faster and improve glide stability. If you’re only looking for general snowboard maintenance for all types of snow, then a universal wax designed for all temperatures is your best bet.

Learn more about the types of snowboard wax and their uses.

Contents show
Most boards will need some type of snowboard wax deck tune-up after a beating on the slopes.
1. All temperature wax is an all-in-one wax for any type of snow.
2. Perfect your glide with temperature-specific snowboard wax.
Types of snowboard waxes aren’t the only thing you should know about waxing your board. Snowboard wax also comes in different compositions.
Hydrocarbon
Fluorocarbon
Base Prep
Eco-Friendly Plant-Based
Recycled
Graphite or molybdenum
Now that you know about the types and compositions of snowboard wax, it’s time to take a look at the different styles of wax.
Liquid wax is easy to apply but only lasts one day.
Block wax is the most common one used for snowboard bases.
Rub-on is a go-to wax when you’re in the middle of your snowboarding day.
Powder is used after applying your block wax.
Paste wax is an easy and quick snowboard wax.
Spray-on snowboard wax is used for an extra layer of protection after applying block wax.
FAQs
What supplies do you need to wax your snowboard?
How do you wax your snowboard base?
How often should I wax my snowboard?
Will it damage my snowboard base if I don’t wax it?
Can I use rub-on snowboard wax instead of hot wax for maintaining the base?
Can I use a clothes iron to melt snowboard wax?
What is an inexpensive but good all-around snowboard wax?

Most boards will need some type of snowboard wax deck tune-up after a beating on the slopes.

Try one of these forms of snowboard wax for a more solid ride and to increase the lifespan of your board.

1. All temperature wax is an all-in-one wax for any type of snow. 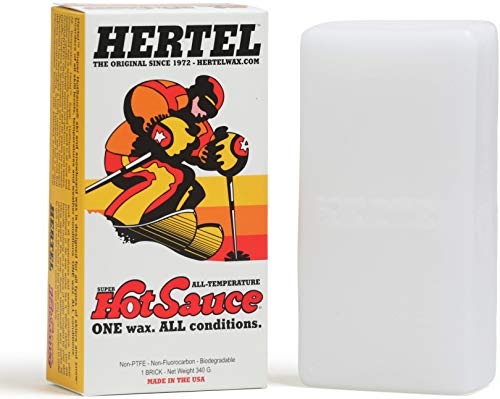 These snowboard waxes are universal. If you’re a snowboard hobbyist and only go occasionally, an all-temperature wax is good for you.

The pros of all temperature wax are it gives an excellent glide, it’s not complicated, and it protects your base.

The cons of all temp waxes are that they’re not the best for professional snowboarding in extreme weather conditions. 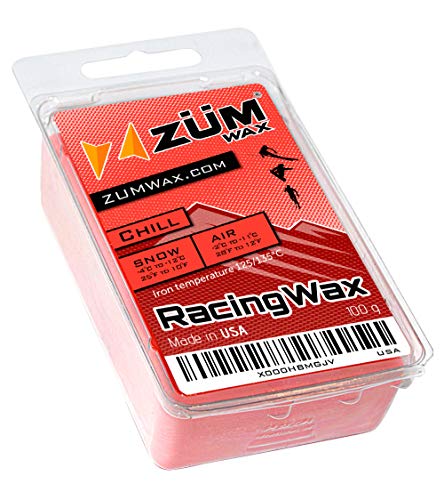 Temperature-specific snowboard wax brings your glide to the next level. These waxes hone in on the air temperature, rather than snow temperature.

Before hitting the slopes, make sure you check the temperature for the day and time you’re planning to go out. You can find temperature-specific wax in four ranges running as low as 10°F (-12°C) to 50°F (2°C).

The pros of temperature-specific wax are that you can tailor it to the air temperature, and it promotes the snowboard’s glide and acceleration.

The cons of using temp-specific wax are that you have to consider the air and snow temperature at the top of the slopes. If you apply wax at the wrong temperature, your performance will decrease.

Types of snowboard waxes aren’t the only thing you should know about waxing your board. Snowboard wax also comes in different compositions. 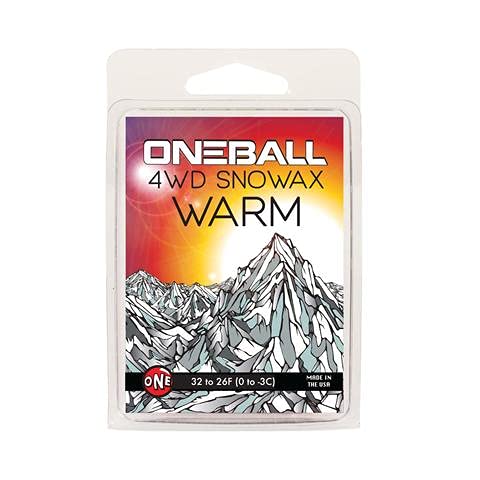 Hydrocarbon wax, commonly known as paraffin, is composed of hydrogen and carbon that are found in crude oil. This iron-on wax is great for intermediate levels. You can also find hydrocarbon wax in synthetic forms.

The pros of this wax are that it’s economical, lasts for quite a while, and keeps your base gliding. 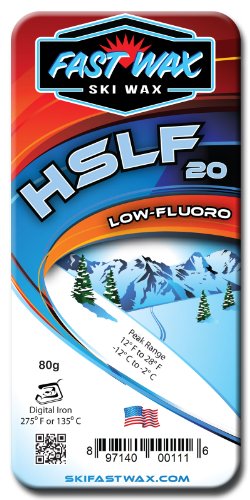 You don’t need a science degree when you look for waxes with fluorocarbon, but it helps to understand the four kinds available. The four waxes that are fluorocarbon mixes are high, low, hybrid, and pure.

The pros of waxes with fluorocarbon are that they repel more water than other types of wax, resist oils and dirt, and they’re durable.

The one con about this wax is that the more fluorocarbon in the wax, the more expensive it is. 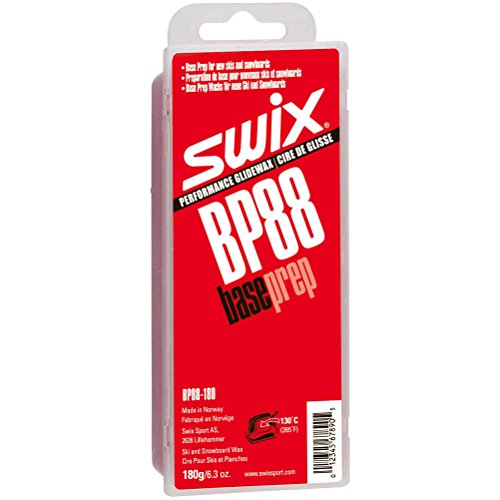 This is an absorbent, soft wax that penetrates into the base of your board. You apply base prep to your snowboard and then scrape off a few layers. After that, you apply whatever type of wax you choose. 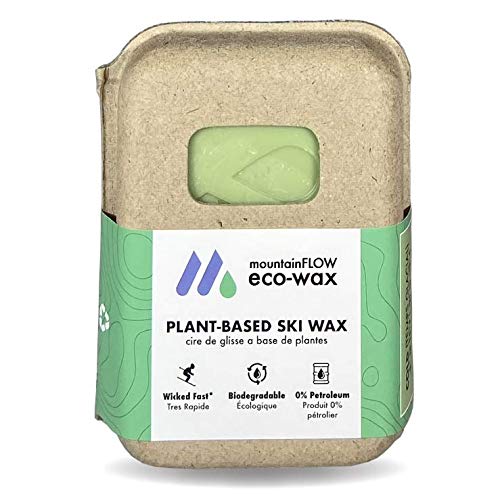 Unlike most petroleum-based snowboard waxes, plant-based wax is biodegradable and made only from plants. This makes it non-toxic, and safe for the snowpack and watershed. 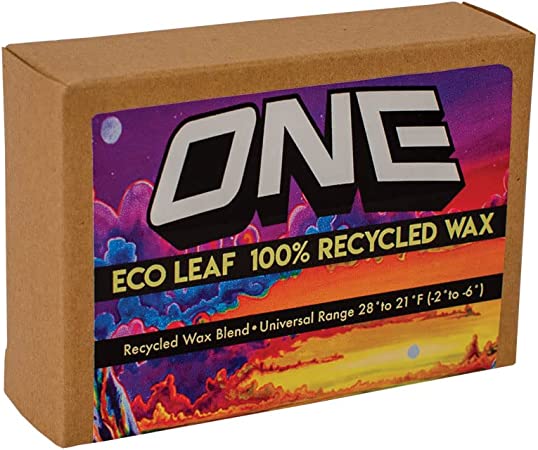 This board wax is made from the remnants of other waxes. The manufacturer melts the leftover wax shavings together, forming it into a new product. You might be able to find this at a lower cost than other all-temperature waxes.

The two pros to recycled wax are that it’s economical and recyclable. 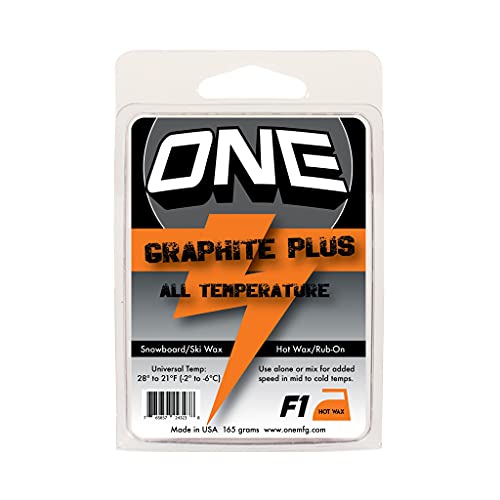 When you use graphite wax, you have to mix it with another type of wax, such as hydrocarbon or fluorocarbon. The reason is that it doesn’t protect your board.

The purpose of graphite wax is to resist the friction caused by dirty or dry snow that has sand particles or other debris embedded in the snow. This usually happens in the spring or when there’s no new snow covering.

See also  Is it Easier to Ski with Short Skis?

Molybdenum, also known as moly, is an alternative to graphite and works better for counteracting static and increasing speed.

Graphite wax is economical and useful for gliding through dirty snow.

Now that you know about the types and compositions of snowboard wax, it’s time to take a look at the different styles of wax.

Once you’ve decided on the type of snowboard wax and the composition you want to use, you’ll see the following styles of wax. They each vary in effectiveness.

Liquid wax is easy to apply but only lasts one day. 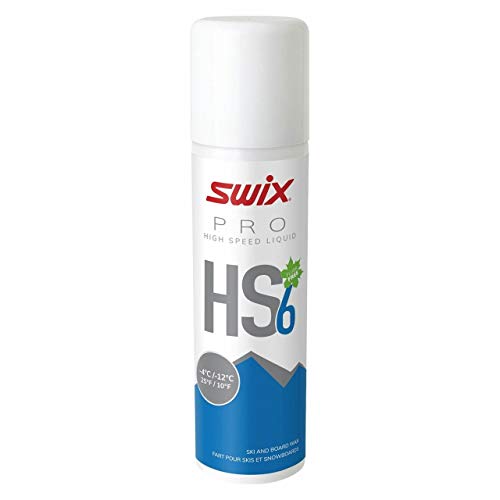 All you need to apply liquid wax to your snowboard is a soft cloth. The liquid form helps it to penetrate the board base better than other waxes. You can also find it blended with fluorocarbon waxes, which benefits gliding.

Block wax is the most common one used for snowboard bases. 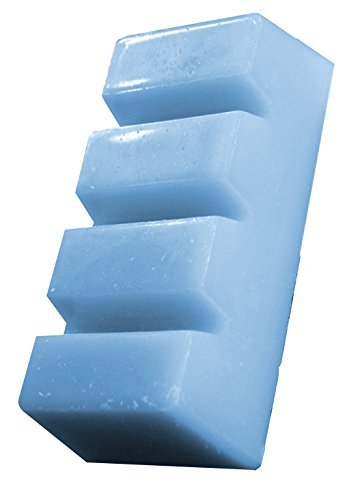 You need to melt block wax and iron it to spread it completely to the board edges and fill all the pores.

Keep in mind, that you have to be careful when applying hot wax to your base. Excessive heat burns off the base chemicals and ruins the snowboard base. Always try to keep your iron at a moderate setting. Use a scraper to remove excess wax that prevents a smooth glide.

Rub-on is a go-to wax when you’re in the middle of your snowboarding day. 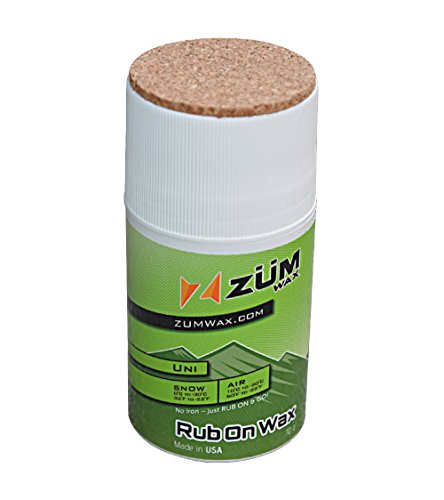 If you notice friction building as the day of boarding wears on, you can apply rub-on wax right on the spot. It’s great when your board feels sluggish.

It’s available in a roll-on or block form.

Powder is used after applying your block wax.

Once you’ve layered your base with block wax, sprinkle powder wax over the surface. Then you use a cork to buff it.

Powder wax has a large amount of fluorocarbon in it, so it’s a pricey option.

Paste wax is an easy and quick snowboard wax. 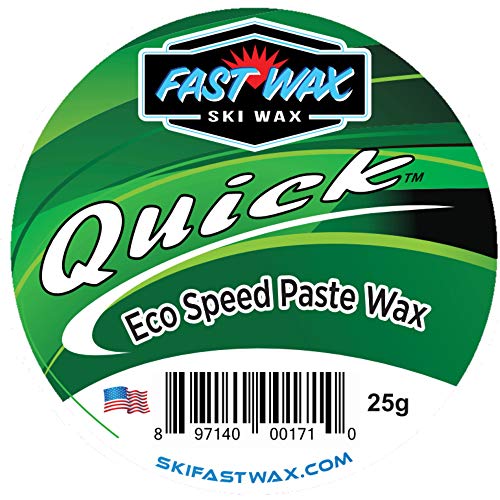 Not only is snowboard paste wax easy and quick, but it’s also inexpensive. It’s usually available in the all-temperature type of wax and comes in an applicator.

The only con to paste wax is that it only lasts for one use. For convenience and a little smoother glide, paste wax is excellent.

Spray-on snowboard wax is used for an extra layer of protection after applying block wax. 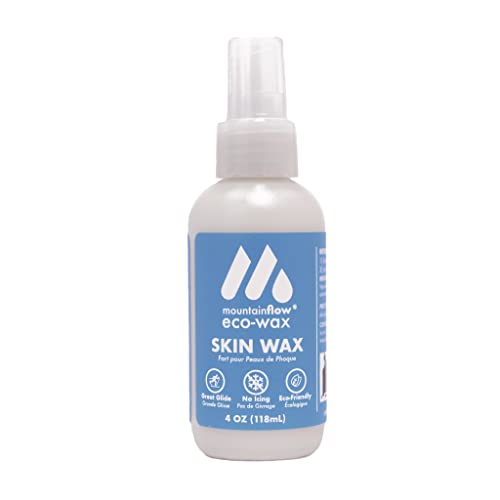 After applying your layers of block wax, use spray-on wax for added protection. Let your base absorb the spray-on wax for five minutes before buffing it. Make sure you give it a nice buffing, so it lasts longer on your snowboard base.

What supplies do you need to wax your snowboard?

Waxing your snowboard is part of the maintenance routine that keeps your equipment in great shape and improves performance. Many snowboarders wax their own boards, rather than dropping them off at a snowboard wax technician.

You need the following supplies to wax your board to keep it from drying out.

How do you wax your snowboard base?

Make sure you wax your snowboard base in a well-ventilated area. It can get messy from dripping wax, so make sure you’re not waxing on anything you don’t want to be ruined.

See also  Can You Wear Rain Pants for Skiing?

Loosen your bolts a little, so they don’t cause the wax to dimple. You want a level wax base.

Next, scrape off any old wax and clean it with a base cleaner. Then, turn on the wax iron to medium heat.

Start melting the wax onto the base. If your wax starts smoking, the iron is too hot. Iron the melted wax so that it spreads across the base. Let it cool, then use your scraper to remove the extra wax. Make sure to remove any wax from your rails.

How often should I wax my snowboard?

The rule of thumb is to wax your snowboard after using it three or four times. It depends on snow and weather conditions, also.

Will it damage my snowboard base if I don’t wax it?

Not waxing your snowboard won’t damage your base, but you won’t have the smoothest glide. Without wax, the snow can catch the edges of your board, slowing down your ride. You’ll definitely feel a better performing board if you apply wax.

Can I use rub-on snowboard wax instead of hot wax for maintaining the base?

It’s not a good idea to use rub-on wax for maintaining your snowboard base. Rub-on waxes are for temporary, quick waxing when you’re on the slopes. If you’re halfway through your day, and it feels like you’re boarding through mud, rub on some wax for a faster glide.

Can I use a clothes iron to melt snowboard wax?

You could use a clothes iron to melt snowboard wax, but you’ll never be able to use it for clothes again. I’ve heard of people covering the bottom of the iron with aluminum foil to protect it.

What is an inexpensive but good all-around snowboard wax?