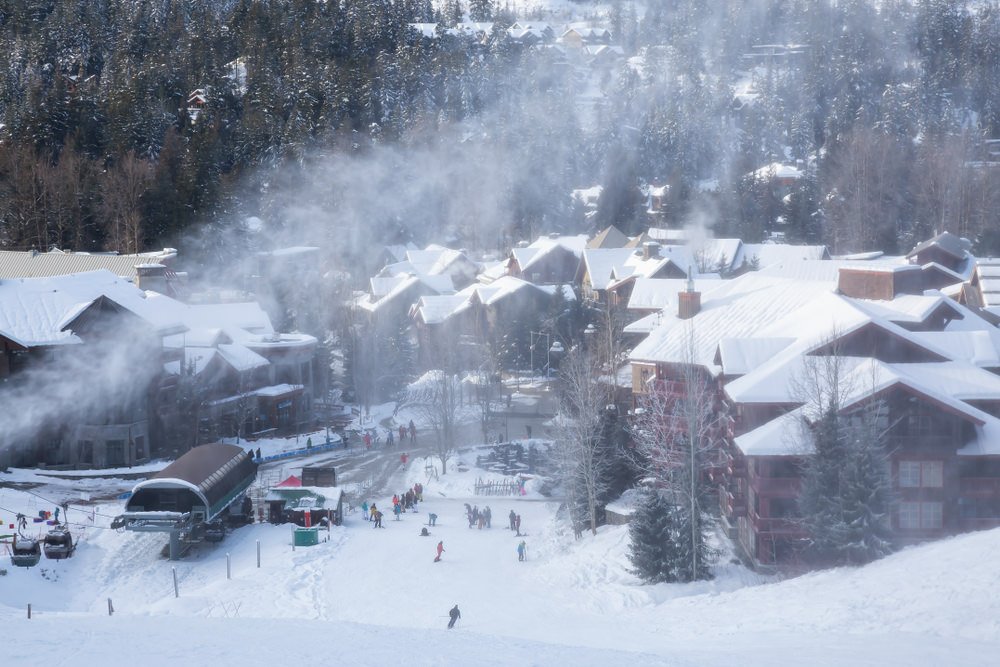 Short answer: If you want a quiet stay but still have access to pretty much all amenities, Creekside is the best value for your dollar for accommodations… by far.  It’s particularly good if you have kids and aren’t soaking up Whistler nightlife.

Contents show
Where is Creekside?
Skiing out of Creekside
Three great hotels to choose from in Creekside
Whistler Kids ski camp and lessons
Plenty of Airbnb rentals in Creekside
Pedestrian Village
Creekside restaurants
Other Creekside village amenities
Mountain biking in creekside
Avoid traffic jams into the main Whistler village
Is staying in Creekside worth it? 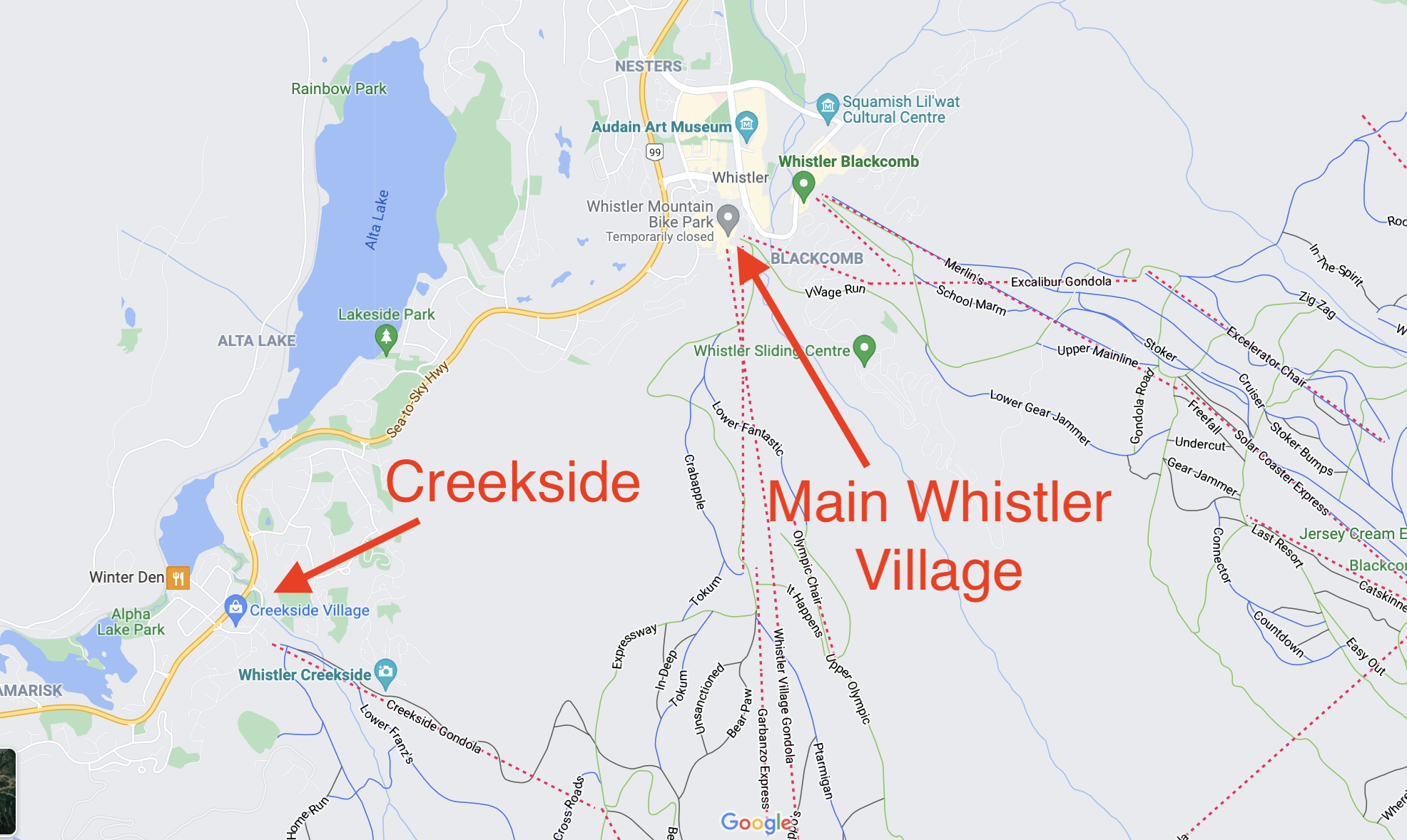 It’s seven kilometers (5 miles or so) south of Whistler Village.  You could walk to the main village it but it’s pretty far.

Skiing out of Creekside 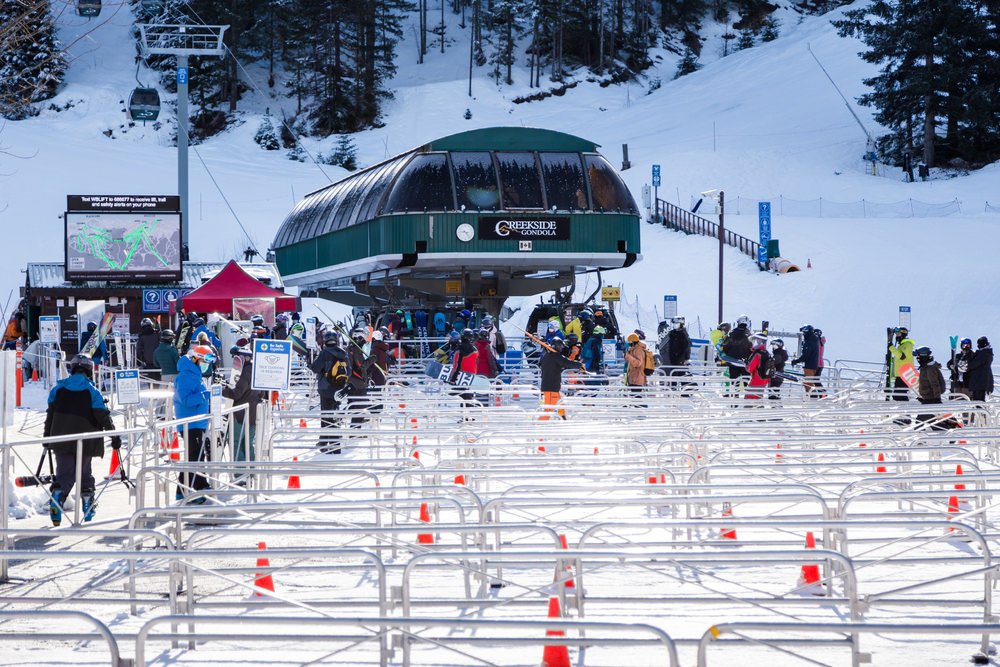 It has its own gondola so you can easily ski out of Creekside.

What makes Creekside a viable option is the fact it has a gondola that takes you up into the slopes. From there you can access all that Whistler and Blackcomb have to offer.  If it weren’t for the gondola, we wouldn’t consider staying in Creekside.

At the top of the Creekside gondola is a small café with bathrooms where you can get a coffee, beer, beverages, sandwiches and chili.  I ate a lot of chili there.

See also  How Long is the Ski Season in the Various Main Ski Regions throughout the World?

Are gondola lineups shorter in Creekside?

I don’t think so.  We ski during the week when it’s slower but it gets busy on Friday.  The line extends well into the village.  In other words, don’t stay in Creekside hoping to avoid gondola lines.  It gets busy there as well.

Is there public parking in Creekside?

Yes, there is and it’s free. It’s not a long walk from the parking lot to the gondola. I have no idea if it ever fills up since we stay at a Creekside hotel with underground parking.

Enjoy one of Whistler’s longest ski runs into Creekside

Can beginner skiers ski the slopes into Creekside?

The runs from the top of Creekside gondola into Creekside are blue so they are not super easy.  That said, our then five year old son, who was somewhat of a beginner did just fine on those runs although it took quite a while.  The other option is you are permitted to take the gondola down the mountain which we also did.  In other words, we took the gondola up, then chair lifts into higher regions of the mountain where there were green runs for our youngest son.  Once we made it to the top of the Creekside gondola, we just rode it down into the village.  Toward the end of the week, he tackled the blue runs as well and did just fine.

Three great hotels to choose from in Creekside

We stay in First Tracks Lodge which is part of the Legends Hotel but a separate building.  Legends is on one side of the gondola and First Tracks Lodge the other. Both are steps away from the gondola so if you’re staying in Creekside, those are the best two hotels.  The third hotel is Evolution which is still very close to the Gondola; you can walk to the gondola with your gear.

The three hotels are owned by the same company.  All three have a pool and hot tub.  All three offer large accommodations which is why we love it. We get a three-bedroom unit in First Tracks Lodge for the same price that a one-bedroom suite would cost in the Fairmont (Blackcomb) or Westin (Whistler Village).

Creekside offers a Whistler Kids ski camp location as well which is awesome.  The only thing is that last year and this coming year, it’s not in operation due to Covid. My guess is it’s due to fewer people going to Whistler and staff shortage.  Last year the Whistler kids in Creekside was closed at the last minute so our kids skied out of Blackcomb. We had to drive them to Blackcomb every morning which was unfortunate.  This coming year it’s closed as well. Our solution this time was to get private instructors for our kids who will ski out of Creekside so we don’t have to drive anywhere first thing in the morning. We can walk the 75 yards to meet the instructor, drop our kids off, and hit the slopes right out of Creekside.

Plenty of Airbnb rentals in Creekside 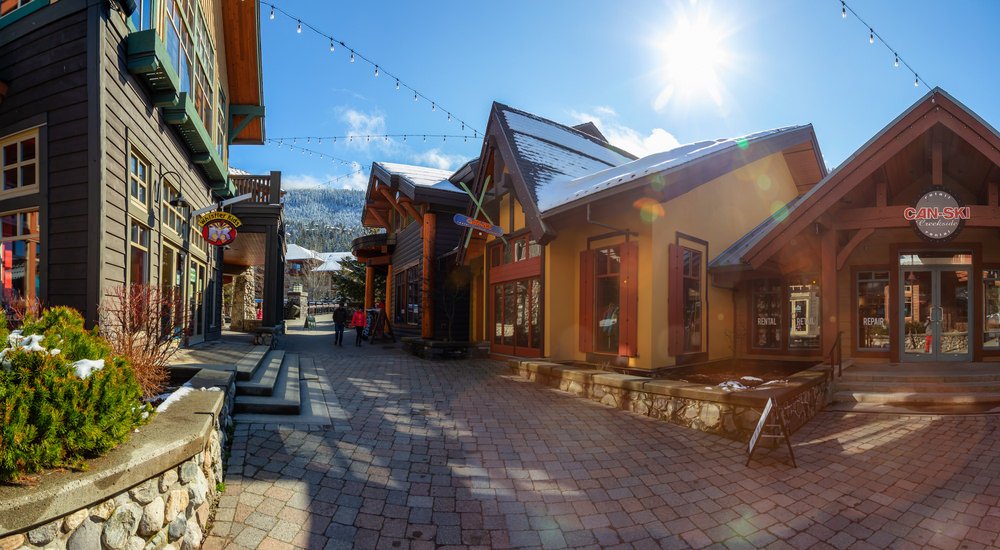 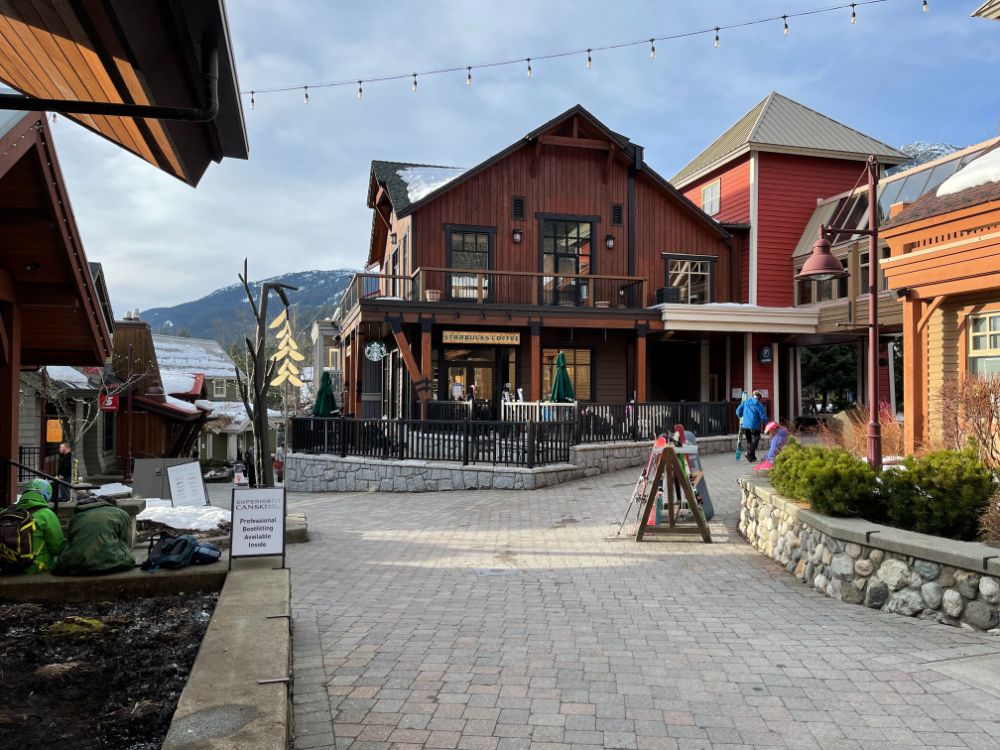 What struck me most the first time we stayed at Creekside (in a house in the Kadenwood neighborhood with its own gondola into Creekside) was how quaint the village is. Moreover, it offers everything you need and it’s all very easy to walk to.  It really is a well done third village in the Whistler area.

The one downside of Creekside is it doesn’t offer many restaurants. There’s Dusty’s in Legends which is okay.  There’s also the popular Rimrock Café, which we have yet to try.  There’s a Starbucks in Creekside village as well as a bakery.  Because we have young kids, we tend to eat in so the lack of restaurants isn’t an issue.  If we do go out one night, we drive to the main village.  We either cook or order in with the WhistlerDineIn app.

The Creekside village is a planned, pedestrian-only quaint village steps away from the gondola. It’s really nice but not large. There’s a grocery store, liquor store, ski rental shop and a variety of other stores in the village. It has all you need. If you stay in one of the three hotels, you can walk to the village in minutes.  It’s very, very nice.

Is staying in Creekside worth it?

It really depends on the ski vacation experience you want.  If you don’t care about nightlife or tons of restaurants to choose from but still like a pedestrian village to stroll through and of course a gondola steps away for skiing, it’s ideal.  We much prefer it over the other villages (upper and lower villages).

However, if you want a luxury hotel experience with the best spa, pool and amenities, then opt for the Fairmont Chateau Whistler or Four Seasons in the upper village (Blackcomb). They’re Whistler’s two finest hotels.

If you want to eat out nightly and enjoy bars, then you definitely want to stay in the main Whistler village (lower village).

All three villages have its own gondola so you won’t be shortchanged with access to the slopes. As far as I’m concerned, the number one thing to consider when booking a ski vacation in Whistler is to ensure you can walk to the slopes/gondola.  Having to drive to a parking lot isn’t fun.

See also  We Just Spent a Week at First Tracks Lodge in Creekside, Whistler and this is What You Need to Know

Related: Is Whistler Blackcomb worth going to? | 31 Things to Do in Whistler in Winter