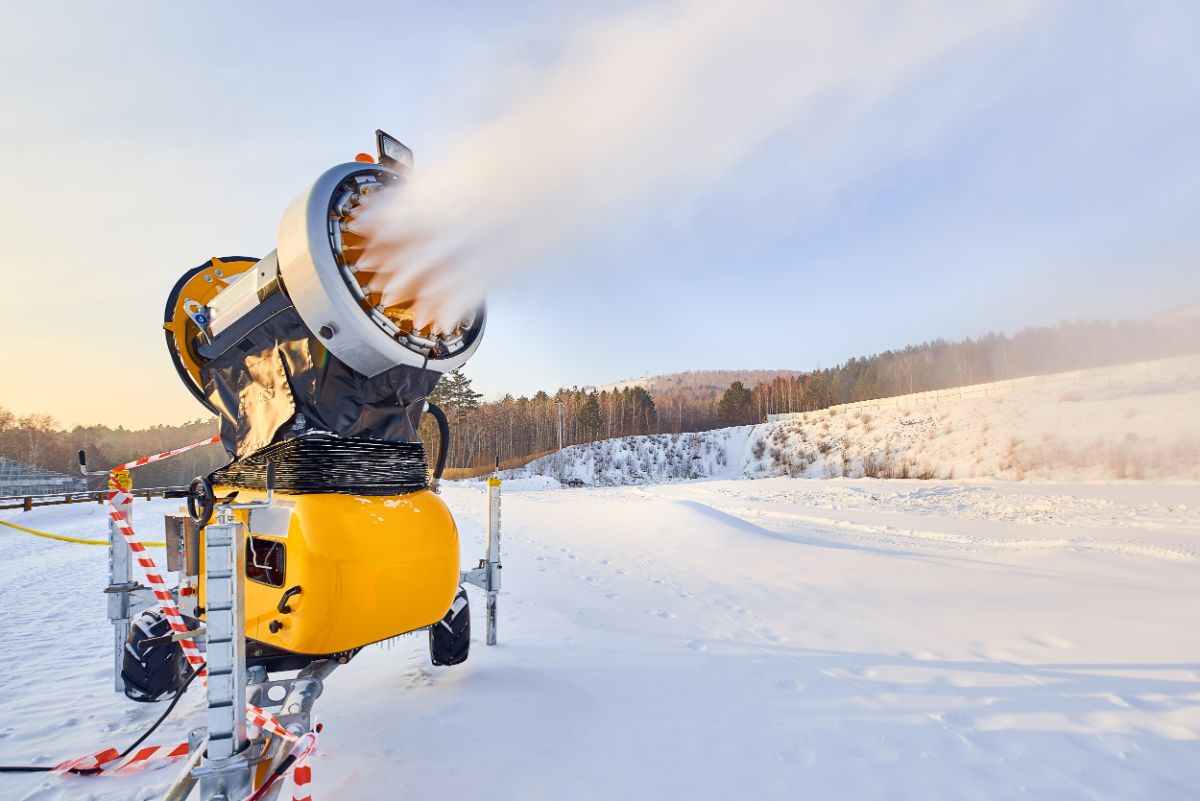 If you’re wondering how cold it has to be for snow-making machines to make snow, the answer depends on what type of technology is being used to generate the snow and where you are located geographically.

For most types of machines, the ambient temperature should be about 28 degrees Fahrenheit or lower before any substantial amount of artificial snow can be made, though several types of machines don’t require temperatures this low and will work if it’s merely below freezing outside.

The Science Behind Snow Making Machines 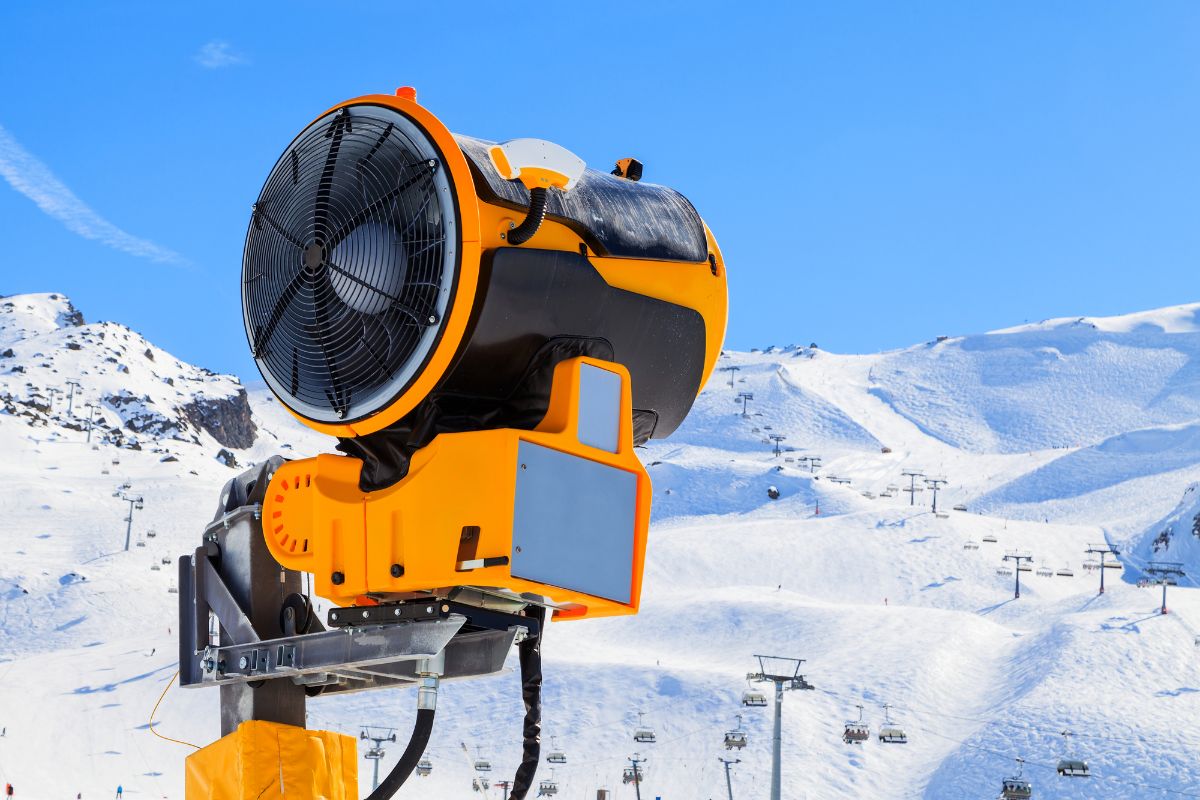 To understand how a snow gun works, you first need to understand what’s going on when water hits freezing air. When warm water vapor touches freezing air, it cools down and immediately forms ice crystals.

The tiny crystals attach themselves to one another and grow into larger crystals. Eventually, they become heavy enough that gravity pulls them down and they fall as snowflakes.

You’ll definitely need weather that is lower than 28 degrees when you’re using a snow-making machine. While some machines work in slightly warmer temperatures, many of them will not work at all or will fail to produce as much snow or ice if they are used in temperatures that are higher than 24 degrees.

See also  Skiing: Winter vs. Spring (Which is Better and Why)

There are some areas of northern Minnesota and Canada where these types of devices can only be used during months like January, February, and March because they require such low temperatures before they can operate. 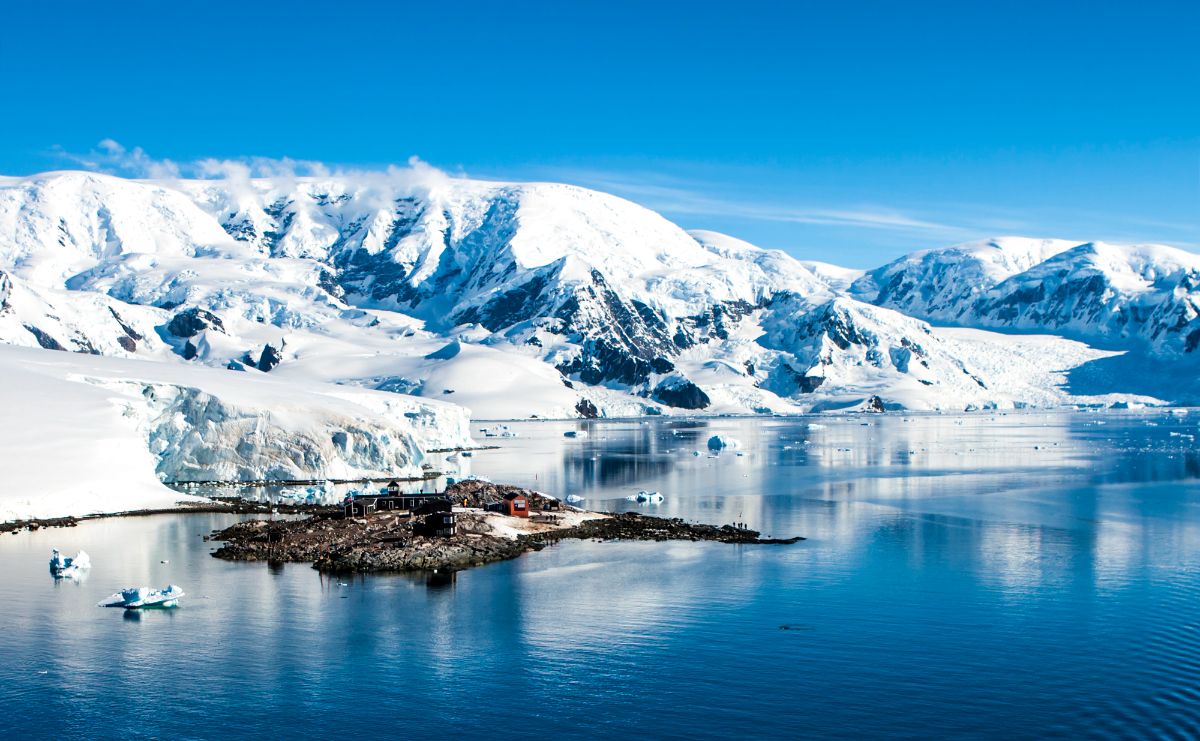 The temperature of your snow-making water determines how well your system can turn that water into snow. The colder your base water, i.e., whether from a pond or a city connection and assuming there is enough humidity in that air to activate your glycol units; you’ll generally get better performance from those units.

Ideally, you are looking at 33 degrees or lower. In fact, if your water is warmer than that, you’ll likely get better results from a traditional refrigeration system than a snowmaking system.

If your base water temperature is too warm and there isn’t enough humidity in that air to activate your glycol units, then performance will suffer because those units can only pull heat out of that air as fast as they can pump water through them.

Keep Your Eye on the Wet Bulb

This is a very basic way of determining how much moisture is in the air and can help you decide whether there will be enough humidity for your ski area’s snowmaking equipment.

How is Snow Made? 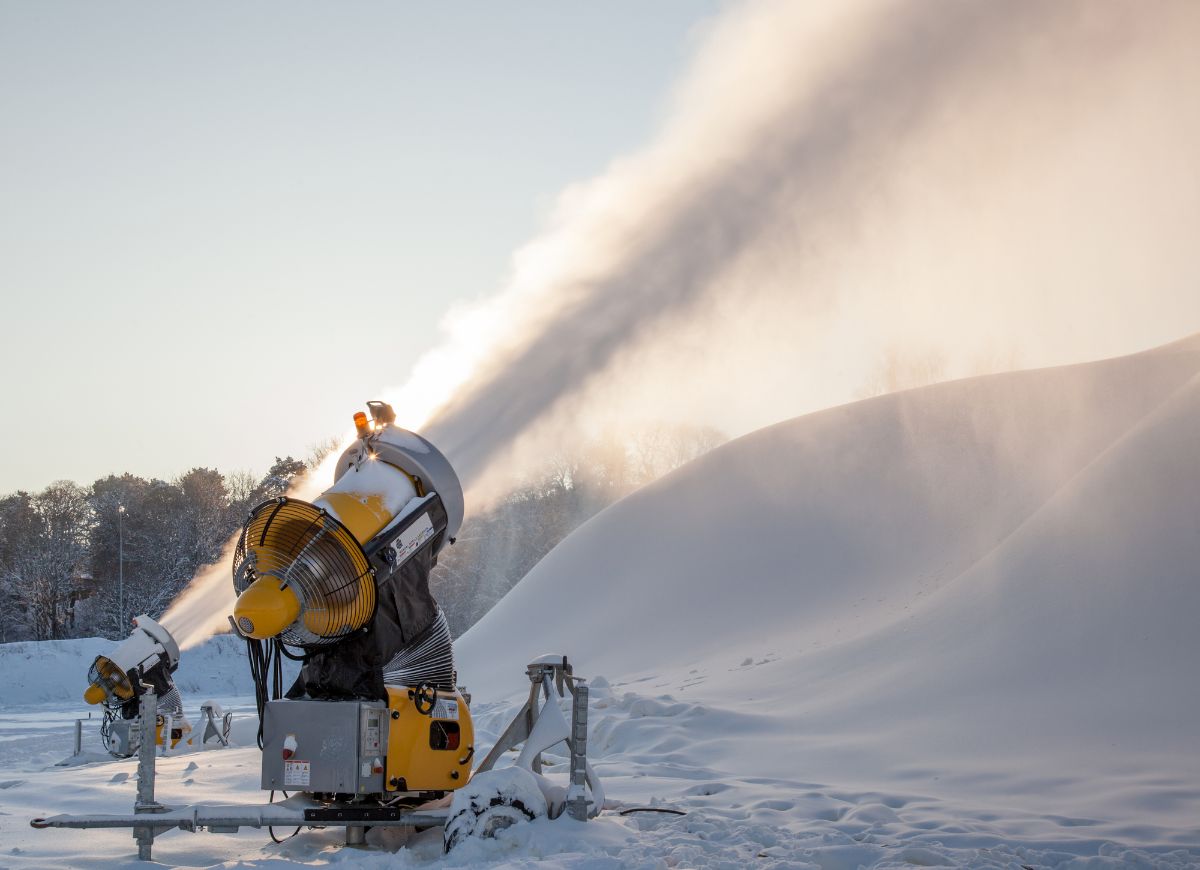 A simple snow-making system includes a water pump and air compressor, which are connected through pipes or hoses.

The pump sends pressurized water through air nozzles on top of a building or structure (such as an arena, office building, tunnel) or in front of moving equipment (like artificial ski slopes).

As air hits water droplets, it creates clouds of fog that freeze on contact with other objects. What’s especially cool is that if you have enough fog and low temperatures, everything will freeze—so you end up with ice crystals rather than slush. Fog is effective because it hangs around longer than mist created by warmer air.

Can You Make Snow at 35 Degrees?

You can make snow at 35 degrees, but you’ll need a wet-bulb temperature below 24 degrees and you’ll have to work quickly. Wet-bulb temperatures are difficult to measure and they fluctuate, so the most surefire way is with a field test.

Simply take a damp sock and put it in the air stream of your machine. If the sock freezes within 20 minutes, you can start making snow; if not, wait until the wet-bulb is lower.

Remember: The wet-bulb only tells you if you can make snow, not how much or how well! It doesn’t tell you whether your storage capacity will be good (if there is any) or what the overall quality of your product will be.

Can You Make Snow at 60 Degrees? 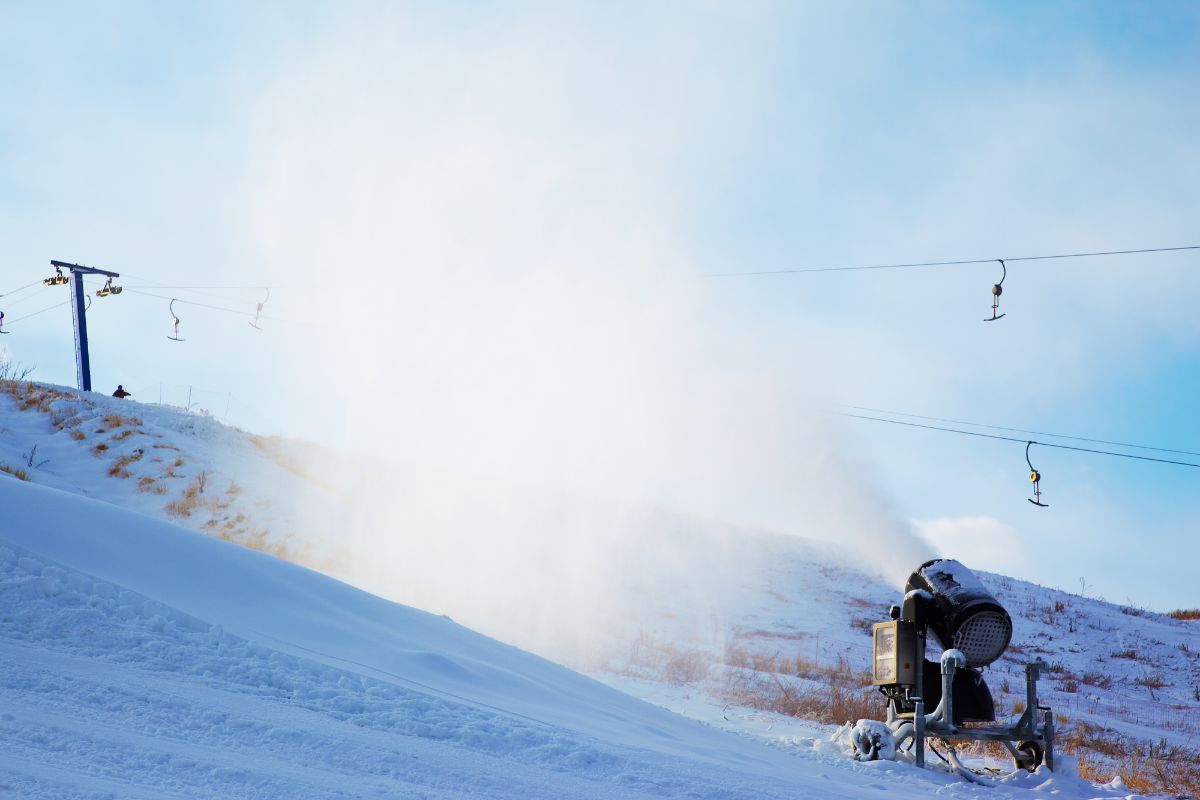 Depending on how much moisture is in your air and how many molecules there are per pound of air (humidity), you could feasibly produce some flakes at temperatures above freezing.

However, 60 degrees is far too warm; even if the humidity were 100 percent, your flakes would turn into water as soon as they hit anything. If you’re talking about a ski slope or ski resort that relies on man-made snow, then you’ll want to get below about 24 degrees F.

Can You Make Snow With a Garden Hose?

Sure, it seems like a funny thought that anyone would actually try to create artificial snow with a garden hose and some ice cubes, but in actuality, you can.  The process of creating fake snow from a garden hose is simple enough, as long as the temperature outside is lower than 28 degrees F.

You’ll need to get an attachment called a snow foam sprayer, which will fit on the end of your garden hose. Put boiling water in the container. Boiling water is higher in vapor and will freeze more quickly than cooler water because it is already closer to gas than a solid.

What is Too Cold For Snow? 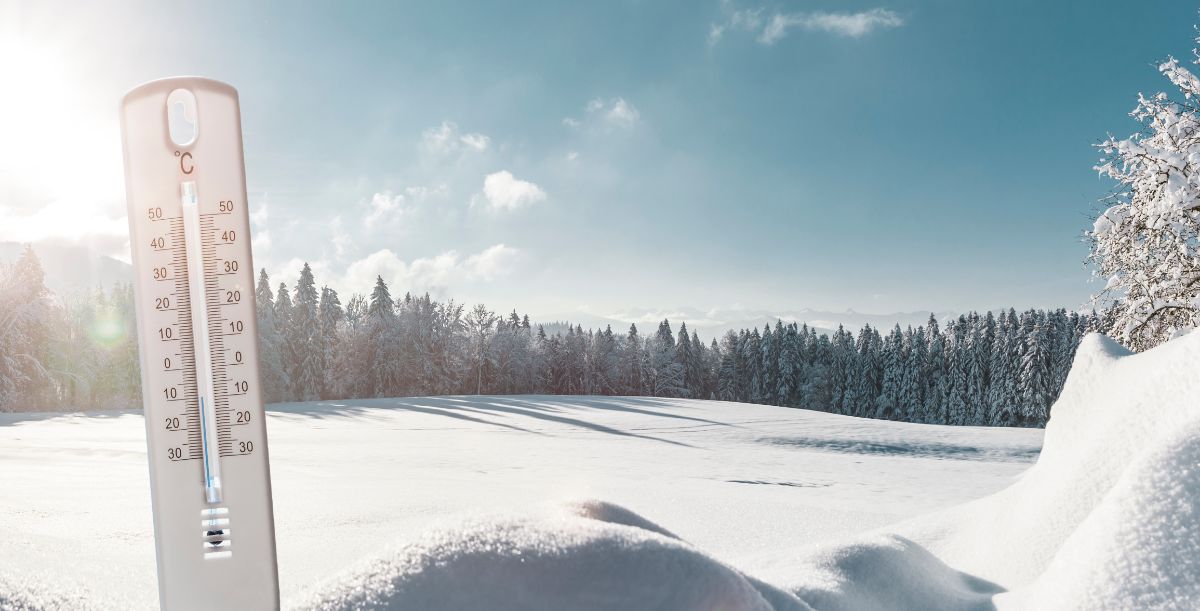 If you live in a region where temperatures routinely drop below -10 degrees Fahrenheit, you might think that’s too cold for artificial snow. In some cases, that’s absolutely true—when temperatures are below 0 degrees Fahrenheit or when wind chill is involved, your chances of getting natural-looking snow from an artificial system drop significantly.

It’s also important to note that humidity has a role in how artificial snow forms. Humidity in both warm and cold temperatures can alter a mixture of air and water from what manufacturers use, which means that you might need less or more of your mix depending on where you live.

If your climate calls for very low temperatures but not extreme wind chill factors or substantial amounts of humidity, your chances of producing natural-looking artificial snow are excellent.

How Much Air Pressure Do You Need to Make Snow

How Long Does it Take to Make Snow? 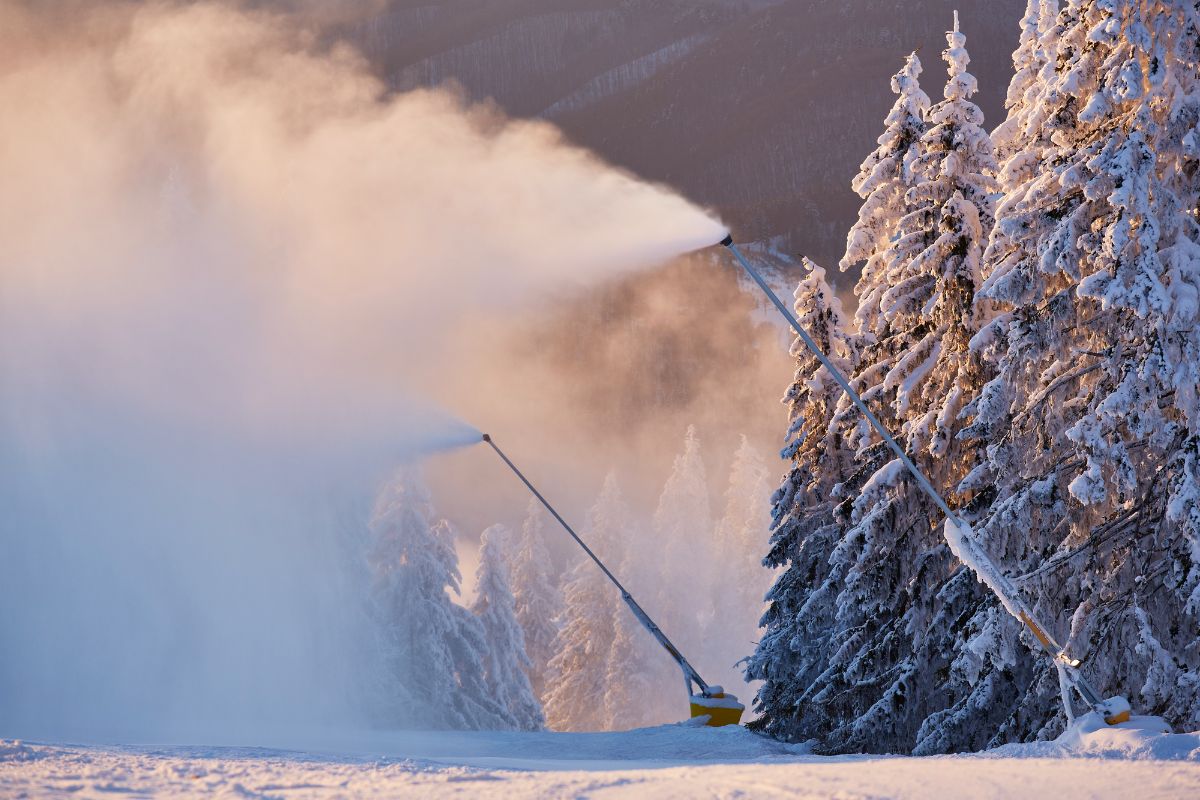 Snowmaking is a big part of most ski resorts’ success, but in order to keep their guests happy (and on their side of pay), they want them out enjoying their frozen fountains as quickly as possible. So what’s an acceptable wait time before hitting up that first run?

That all depends on how much real estate you have available. The more area you can cool down and maintain at near-freezing temperatures, the faster your snowmakers can get to work.

In ideal conditions—nighttime temps around 24 degrees F with winds calm enough not to significantly disrupt the airflow over a large surface area—it takes roughly three hours for your tiny army of snow-spewing machines to start cranking out flakes.