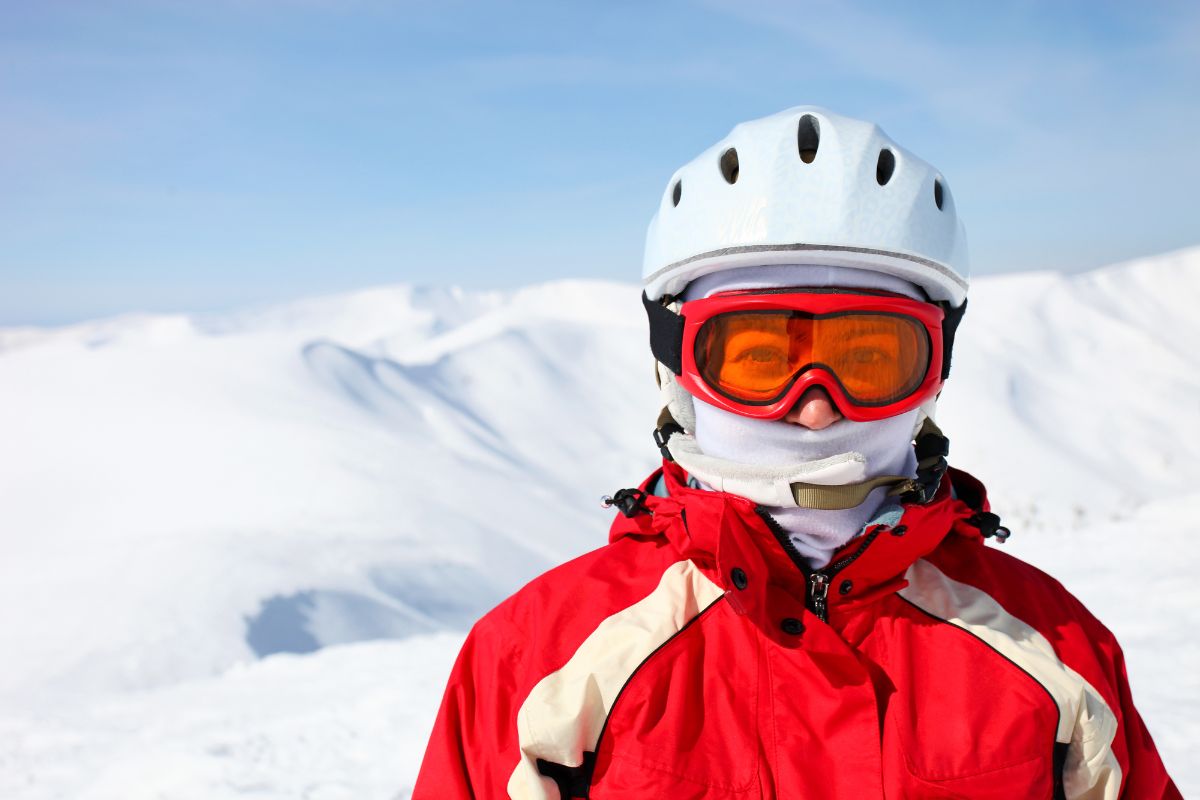 Whenever I’m gearing up for my next skiing sport or other winter exploits, winter jackets, gloves, and hats call on me.

They’re the armor I’ll need as I shred pillowy powdered tree gaps on ski times or snowshoe in the backcountry. One other item I’m never tempted to overlook is the modest ninja gear, the balaclava.

Balaclava has been the talk of the town as a significant headgear or face shield that’s remained in style for centuries.

Never heard of a balaclava? Or you’re wondering what’s so special about the attire? Worry not. I’m here to give you all the information about the balaclava and whether it’s a must-have piece of skiing gear.

What Is a Balaclava? 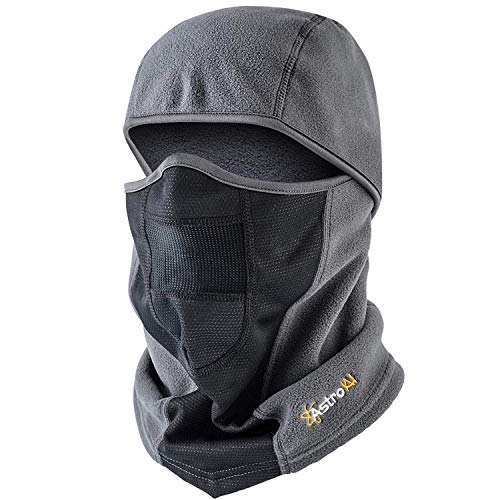 A balaclava is expressly designed for winter purposes. Most enthusiastic outdoors explorers use the headgear; it’s a requirement for skiers, hunters, and winter hikers.

The history of a Balaclava is rather interesting. During the Crimean War, from 1853 to 1856, British militaries would put on a knitted headgear that covered their faces’ upper and lower parts, revealing only their eyes. The attire kept them warm during the Battle of Balaclava.

Over time, the unique face mask worn by the soldiers came to be associated with and named after the nearby Balaclava town.

Balaclavas were initially made of wool, but now they’re comprised of different fabrics, including fleece, silk, and bamboo. It all depends on the purpose for which it’s made.

See also  Do I Need a Backpack for Skiing?

Some people use balaclavas as face masks to cover their identity in modern days. And it’s to this effect that the attire has had its image corroded to some extent. So, ensure you take it off when you intend to get into a bank or any official building.

Who Can Use a Balaclava? 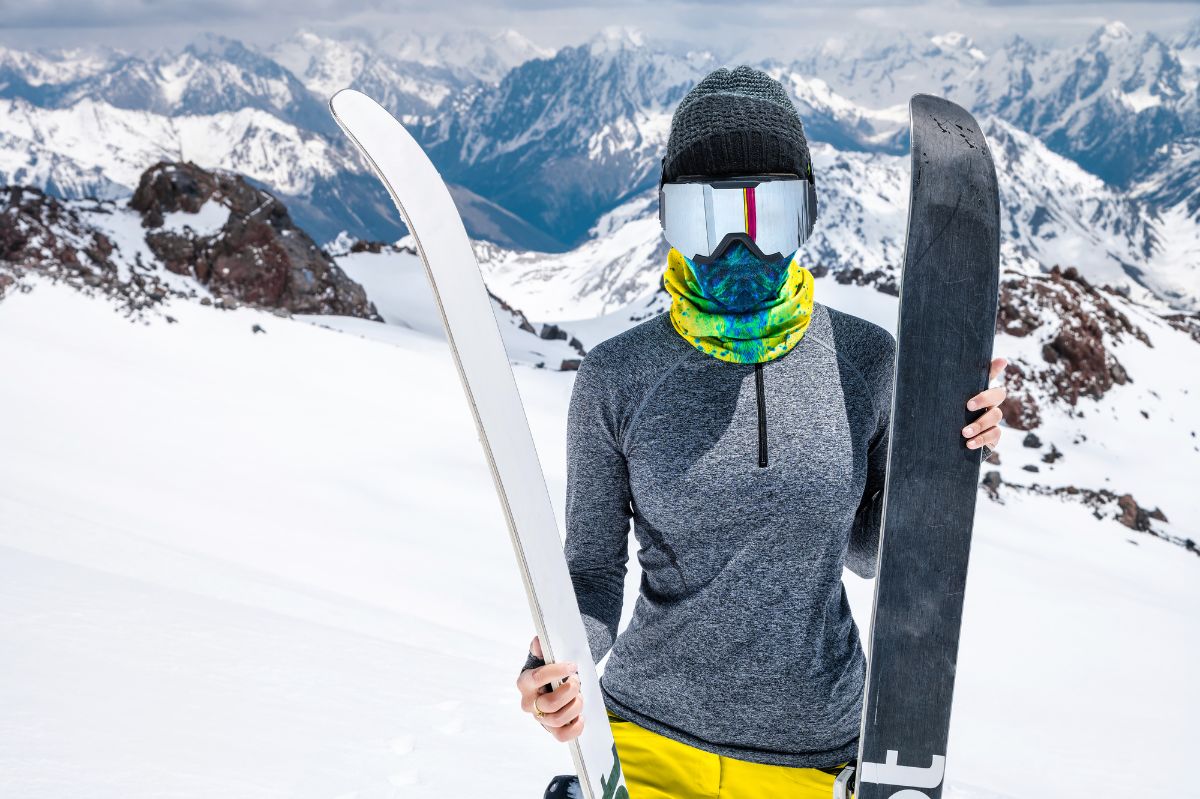 A balaclava is a handy and must-have item for lovers of winter sports. Snowboarders and skiers depend on this handy attire for protection from chapped skin and frostbite, especially in extreme conditions.

Snowmobilers and cyclists benefit from balaclavas; it keeps strong winds from wreaking havoc on their skin.

Balaclava provides enough coverage for your head and neck. As a result, body-generated heat has little room to escape, making excellent attire for mountaineers who want added protection and warmth.

Why Should You Wear a Balaclava? 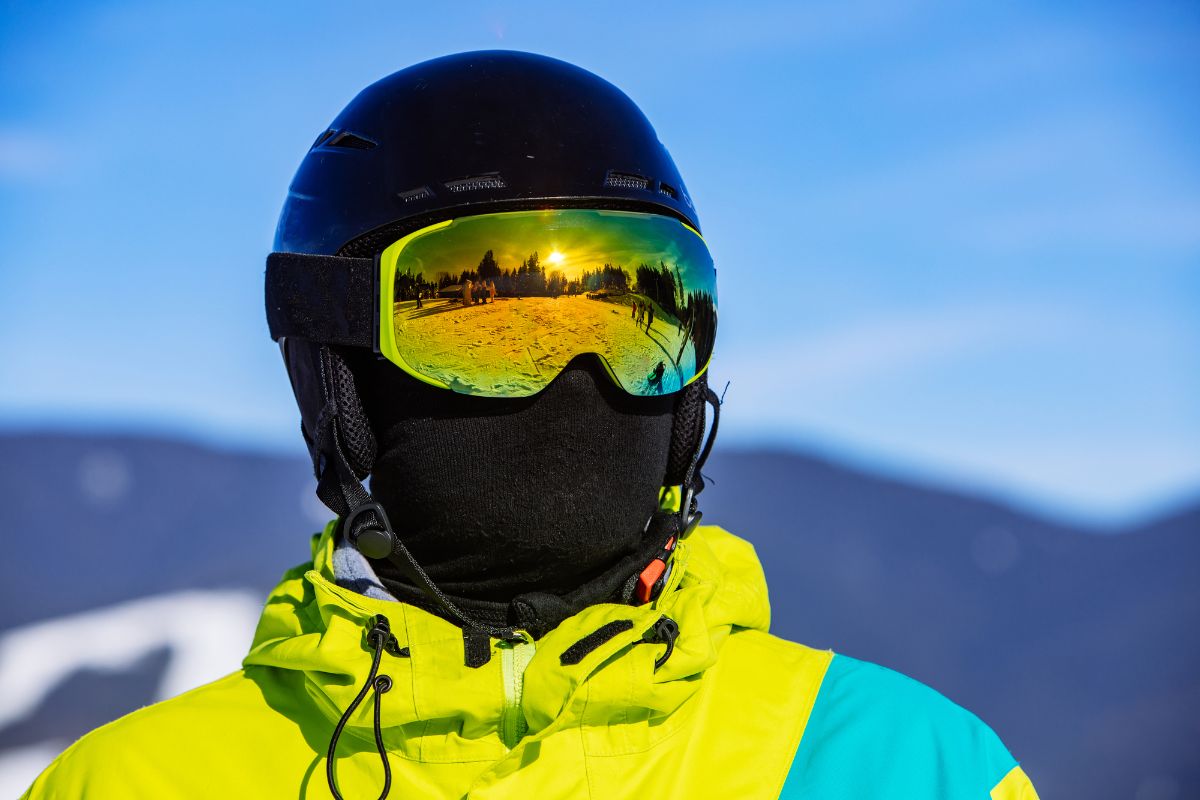 There’s no doubt that people wear balaclavas for some reasons-good ones, of course. Let’s look at some of these reasons why you should consider using a balaclava.

Keeping the wearer warm and dry is the most obvious purpose of a Balaclava. Since the apparel covers the head and lower portion of the face, heat from your head is trapped, so it doesn’t escape. Also, the balaclava’s breathable material prevents fogging on and safety glasses.

Using a helmet can lead to excess sweating and odor due to poor breathability from the outer protective coat. The light weighed balaclava absorbs sweat under the helmet and makes washing the helmet easier.

On top of serving as an insulating material, balaclava will also protect your head and neck. It comes with ample flexibility to offer enough coverage for your nose and help filter dust from the air around.

A balaclava is considered a suitable piece for emergencies for its adaptive designs. You can always fall back on it in case of emergency weather changes.

Is a Balaclava The Same As a Ski Mask? 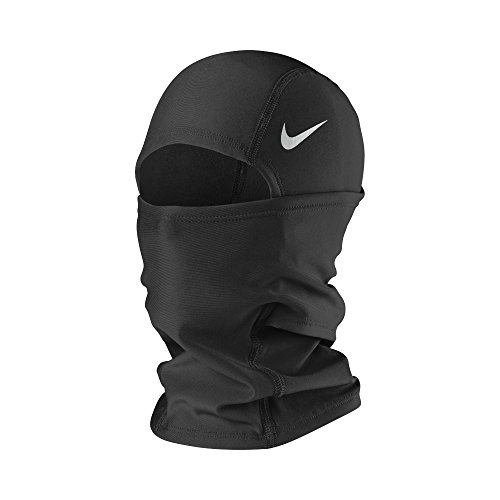 Traditionally, face clothes were known for rituals and ceremonies. Still, with time, advanced countries adopted the attires for use by medical practitioners like surgeons and to keep warm during winter.

Talking of face clothes, is there any difference between a balaclava and a ski mask, or do both terms refer to the same thing?

The balaclava, designed to leave only the eyes and the mouthparts of the nose exposed, goes by various nicknames such as balaclava helmet, bally, or ski mask.

Therefore, there’s no difference between a ski mask and a balaclava. It’s the same thing, and you can use the names interchangeably.

Wearing a balaclava, aka ski mask, on snowy terrain is normal. But it might give you a ‘bad ass’ appearance in other places, or you’ll be called a suspect. So, you better be careful when and where you wear the headgear.

How to Choose the Right Balaclava? 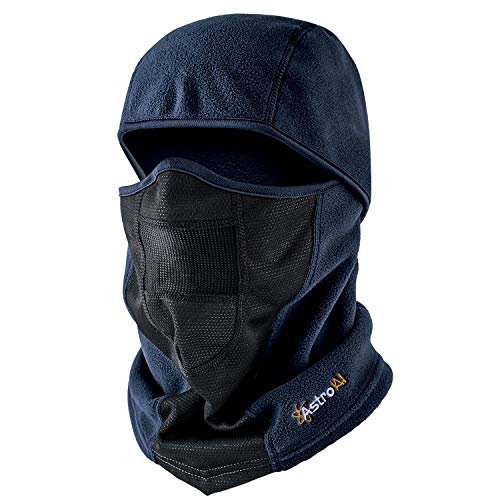 The material of a balaclava is key when making a choice. A heavy balaclava in early winter and late fall; will make you sweat your face off! And you want to ensure you have a headgear that will serve you well in the dead of winter.

See also  Are Down Jackets Good for Skiing?

It’s also a good idea to get yourself a breathable balaclava that can keep moisture from your skin.

Your balaclava should offer an ergonomic fit; it shouldn’t be too tight or loose. If you’re planning to wear a balaclava inside your helmet, pay attention to the density of the material.

Also, see that the inside part of your headgear has a seamless finish. You don’t want unfinished material and threads to rub all over your face.

One tip to home: If you can, make your balaclava all by yourself. You’re guaranteed it’ll fit perfectly and provide maximum comfort.

How Do You Wear a Balaclava? 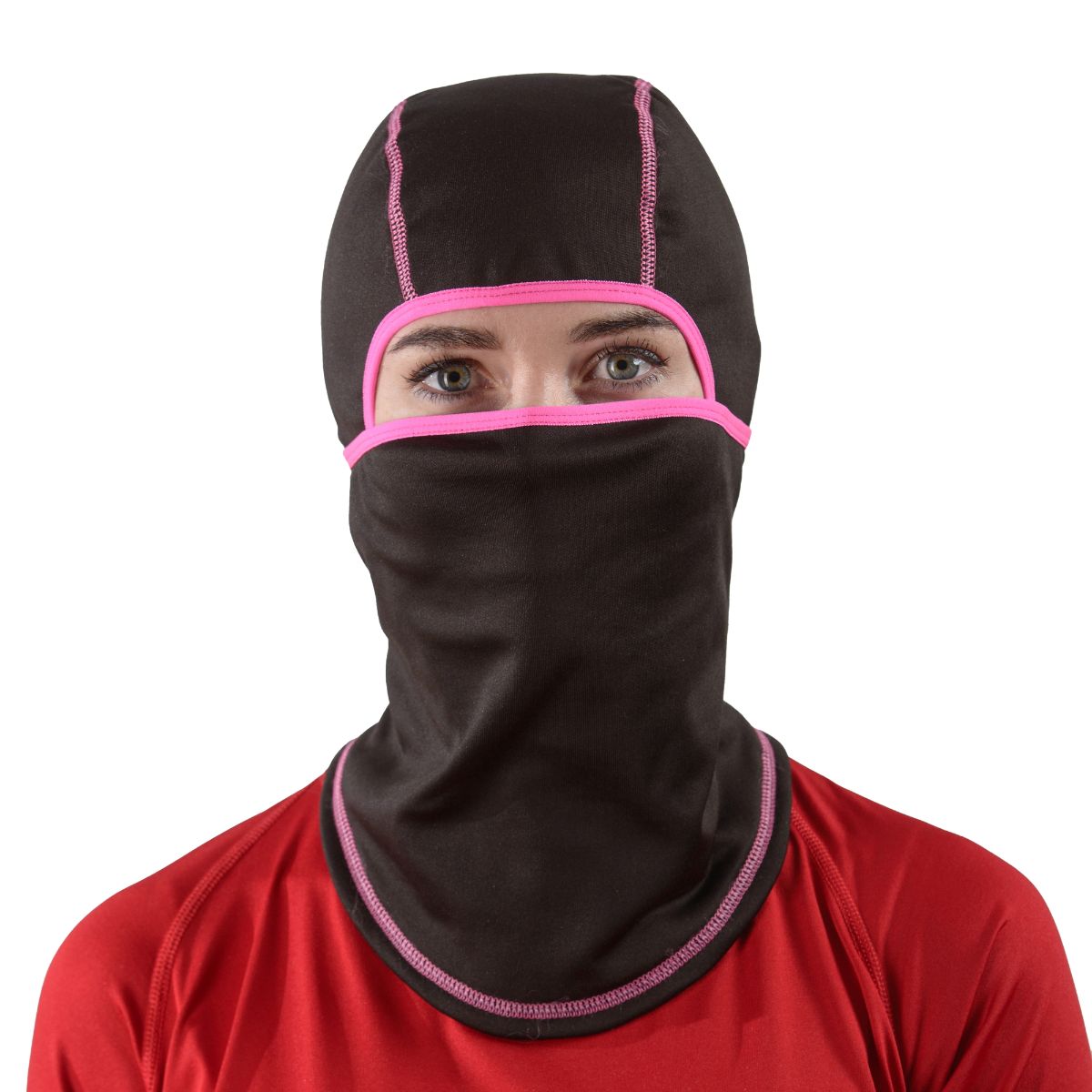 Balaclava is intended to cover your whole head and neck. It also has a good-sized opening, enough for your eyes, nose, and mouth. Once you fold your balaclava down the neck, you can use it as a neck gaiter.

If you’re a balaclava fan and already know how to use one, this could be a game-changing experience. And if you don’t have one, I guess it’s time to go for it and get ready for next winter season.

Here are some steps to adopt when putting on your balaclava:

Step one: Place your favorite balaclava on your head, ensuring that the opening is at the front side. Now roll the rim gently downwards till the balaclava’s cover is positioned on your head.

Step Two: Roll the remaining part of your balaclava’s lower side until it gets to your neck and the upper part of your shoulder.

See also  Goggles vs. Sunglasses for Skiing (What to Wear When)

This step will depend on the nature of the balaclava you have. If it’s long enough, tuck the ends of the balaclava into your t-shirt or collar — whatever top cloth you have. Then push the opening a bit downward to create space for breathing.

Step Three: Pull down the underside as you try to make straight the openings meant you’re your eyes.

This becomes easier if you have an adjustable balaclava. You can align the opening that’s designed for your face.

Step Four: Certain balaclavas are designed with a bigger opening at the upper half. Sometimes, you can tug the opening and use the balaclava the same way you use a scarf.

With a few steps, you have your balaclava on. Congratulations, you can now go out and safely face the winter.

Do You Need A Balaclava For Skiing Anyway?

As an enthusiastic skier and snowshoer, I hardly step into the snow-covered wilderness without my balaclava. The added protection from extreme cold and wind is priceless, especially in the high-altitude terrain where I play.

My favorite balaclava is compatible with my ski helmet and fits perfectly under my hauler hat. When I urge to winter camp, I grab my balaclava and make myself comfortable in the backcountry around a roaring fire. More exciting, I even choose to sleep with it so that the heat doesn’t escape overnight.

The headgear shields me from cheek and nose frostbite in a survival situation. So, I can safely say that a balaclava is a trusted friend for winter adventures. And yes, get yourself one the next time you go skiing.